Jump To a Different Section< Back to Hellcats 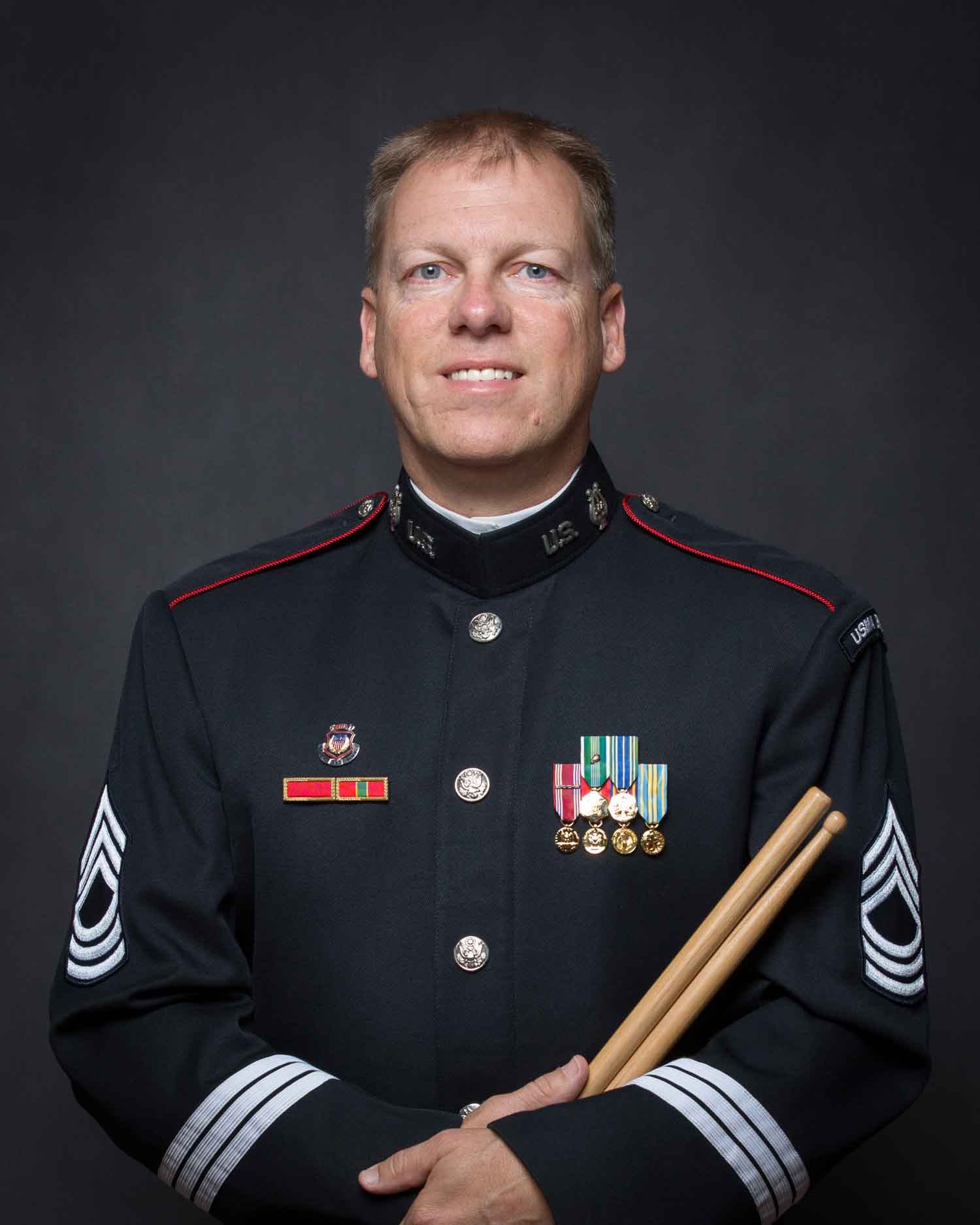 Master Sergeant Jeff Prosperie joined the West Point Band’s Hellcats in December of 2006 and currently serves as both the section leader and principal drummer of the percussion section. Master Sergeant Prosperie is a World Snare Drum Champion and the first and only individual to capture the “triple crown” of solo competition (DCI, PAS, DCA). Master Sgt. Prosperie is a 2018 inductee into The World Drum Corps Hall of Fame and a 2014 inductee into the Louisiana/Mississippi Percussion Circuit Hall of Fame. In addition to his duties as a Hellcat, he also performs on occasion with the West Point Percussion Ensemble, Steel Band, and Concert Band. Master Sergeant Prosperie recently served as the percussion arranger and instructor for the nationally televised Army All-American High School Marching Band. Prior to these positions, he served as Director of Percussion Studies at the University of Louisiana at Lafayette, principal percussion with the Baton Rouge Symphony, and as the percussion designer and caption-head for the World Champion Phantom Regiment Drum and Bugle Corps of Rockford, Illinois. He actively serves as a championship level adjudicator for DCI and WGI and as a marching percussion committee member for PAS. Master Sergeant Prosperie earned a Bachelor of Music Education from Louisiana State University and a Master of Music from the University of North Texas, where he has also completed all course work for the Doctor of Musical Arts degree. Master Sergeant Prosperie has performed, presented clinics, and adjudicated throughout the United States, Canada, Europe, and Japan as well as at PASIC, TMEA, TBA, and The Midwest Band and Orchestra Convention. Master Sergeant Prosperie’s compositions and solo performances can be seen in his book and DVD, Aptitude - A Conversation in Snare Soloing, published by Drop 6. This publication received the very rare rating of a perfect “10” from Modern Drummer Magazine, declaring it a classic. Master Sergeant Prosperie can also be seen as a featured artist on the recent DVD The Rudiment Project by the Percussive Arts Society as well as on several performances on YouTube and downloadable apps with DrumGuru.com. Master Sergeant Prosperie is a performing artist and clinician for Pearl/Adams, Sabian, Innovative Percussion, and Evans. 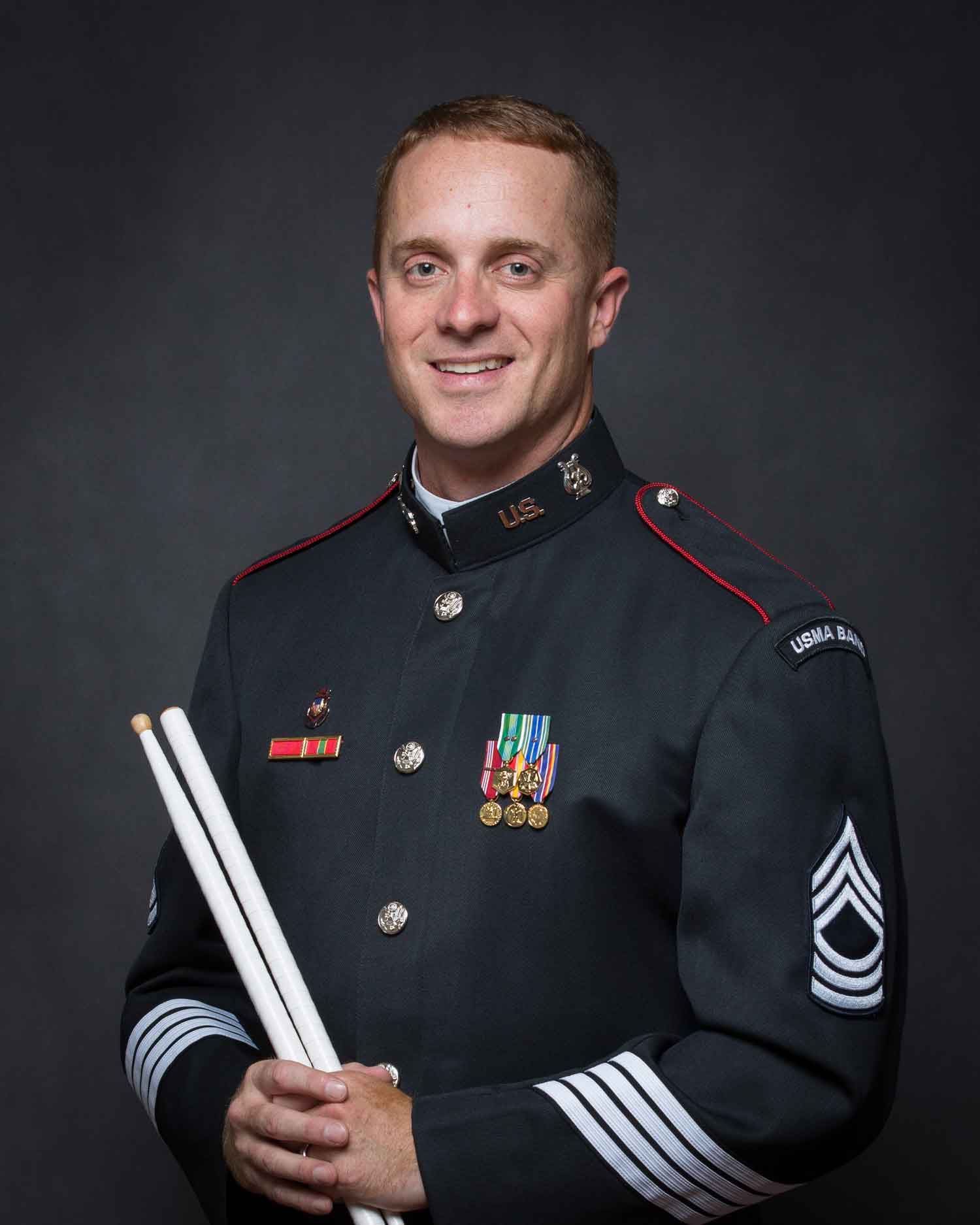 Master Sergeant William Calohan joined the Hellcats in August of 2005. In 2002 he received his Bachelor of Music Education from James Madison University in Harrisonburg, Virginia, where he studied with C. William Rice, Dr. Todd Johnson and Dr. Michael Overman. He completed his Master of Percussion Performance at the University of Minnesota in May of 2005. His teachers there were Fernando Meza and Earl Yowell. As a graduate student, Master Sergeant Calohan taught percussion lessons and the percussion techniques course for undergraduate music education majors. Master Sergeant Calohan has also attended the Leigh Howard Stevens summer marimba seminar, Bob Becker Ragtime Institute, and performed at PASIC 2004 with Rolando Morales-Matos. He was the winner of the 2001 Virginia Music Teachers Association concerto competition. Master Sergeant Calohan has instructed and arranged music for high school marching bands, worked as a freelance percussionist in Virginia, Minnesota and New York, and enjoys arranging and composing original music. 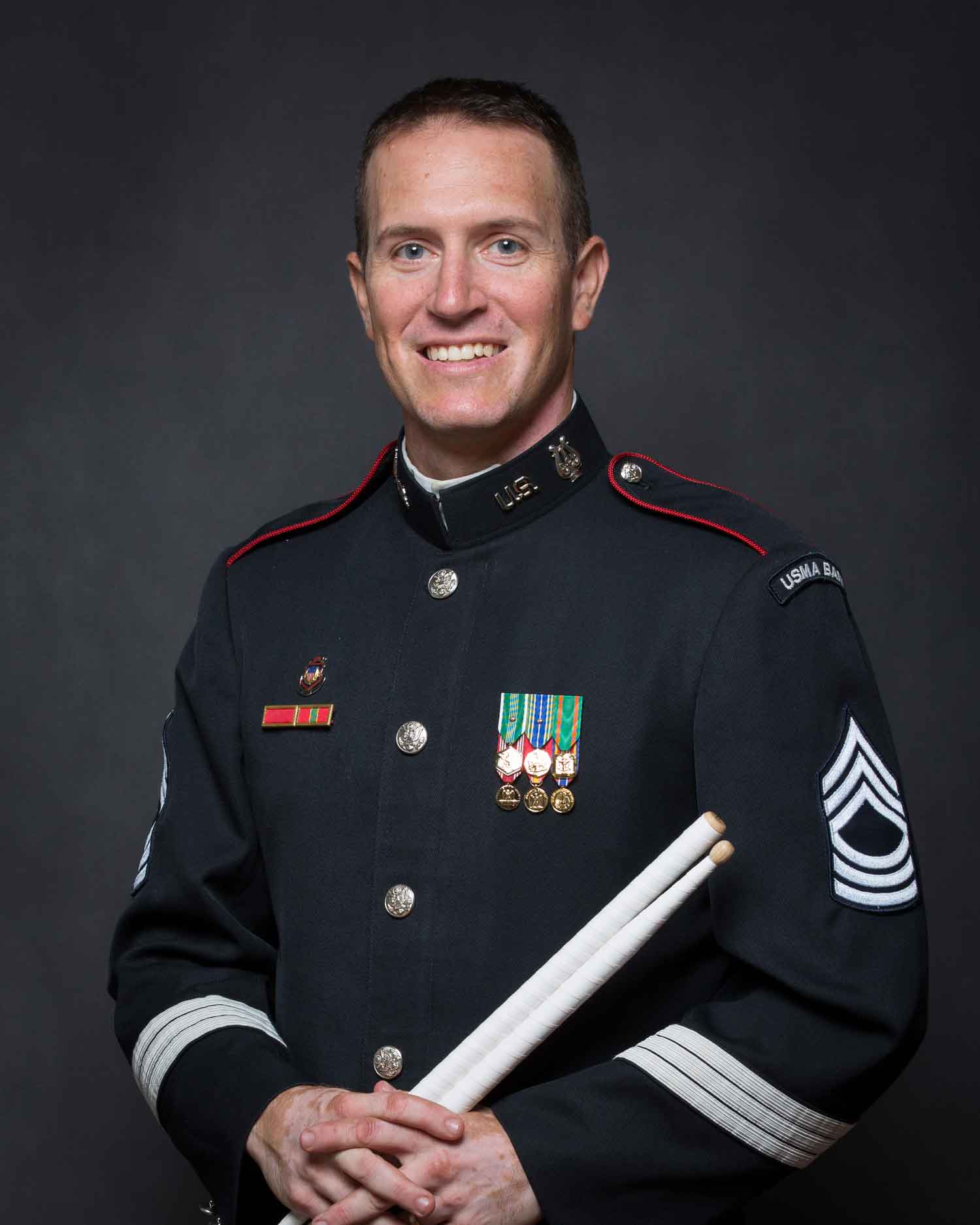 Master Sergeant William Cuthbert came to the West Point Band in November of 2007. He earned his Bachelor of Music in performance from Illinois State University in Normal, Illinois, where he studied with David Collier. Prior to his assignment with the Hellcats, Master Sergeant Cuthbert held a position with the Navy Band Southeast in Jacksonville, Florida. While in the Navy, he performed in the concert band, ceremonial band, jazz big band, and the rock band Liberty. He has performed with the Illinois Symphony Orchestra, Peoria Symphony Orchestra, St. John's River City Brass Band, and the Jacksonville Symphony Orchestra. Master Sergeant Cuthbert has also instructed and arranged music for numerous high school and college drumlines, including Illinois State University and the University of Illinois.

Sergeant First Class J. Andrew Porter joined the West Point Band in May 2005 as a rudimental drummer in the band’s field music group, the Hellcats. As a member of the Hellcats, Sergeant First Class Porter has performed and presented for Drum Corps International World Championships, the Percussive Arts Society International Convention, the KoSA percussion workshops, and the Texas Music Educators Association. Prior to his appointment with the Hellcats, Sergeant First Class Porter was an assistant band director at Barren County High School in Glasgow, Kentucky. He also served two years as percussion specialist for the J.J. Pearce High School cluster of bands in Richardson, Texas, and in 1996 was part of the instructional staff for Nite Express Drum and Bugle Corps. Sergeant First Class Porter holds a Bachelor of Music Education from Western Kentucky University and a Master of Music in percussion performance from Louisiana State University. His primary teachers include Dr. Christopher S. Norton, Dr. Michael G. Kingan, Timothy K. Adams, Jr., Conrad Alexander, and Scott Ford. As a concert percussionist, Sergeant First Class Porter has performed with the New York Philharmonic, the Baton Rouge Symphony Orchestra, the Natchez Opera Festival Orchestra, the Dallas Wind Symphony, and the Brevard Music Center Orchestra. As a rudimental percussionist, he performed in the snare line of the North Canton, Ohio, Bluecoats Drum and Bugle Corps from 1993-1995, and was the snare line section leader for the 1996 WGI Independent World Class Champion Music City Mystique from Nashville, Tennessee. In addition to freelance performance opportunities in the lower Hudson Valley area, Sergeant First Class Porter regularly performs with the West Point Band’s Concert Band, Percussion Ensemble, and Steel Band. As a clinician, Sergeant First Class Porter frequently presents clinics and master classes covering marching and concert percussion techniques for university and high school students. In his free time, he enjoys spending time with his wife and son, woodworking, and cycling. 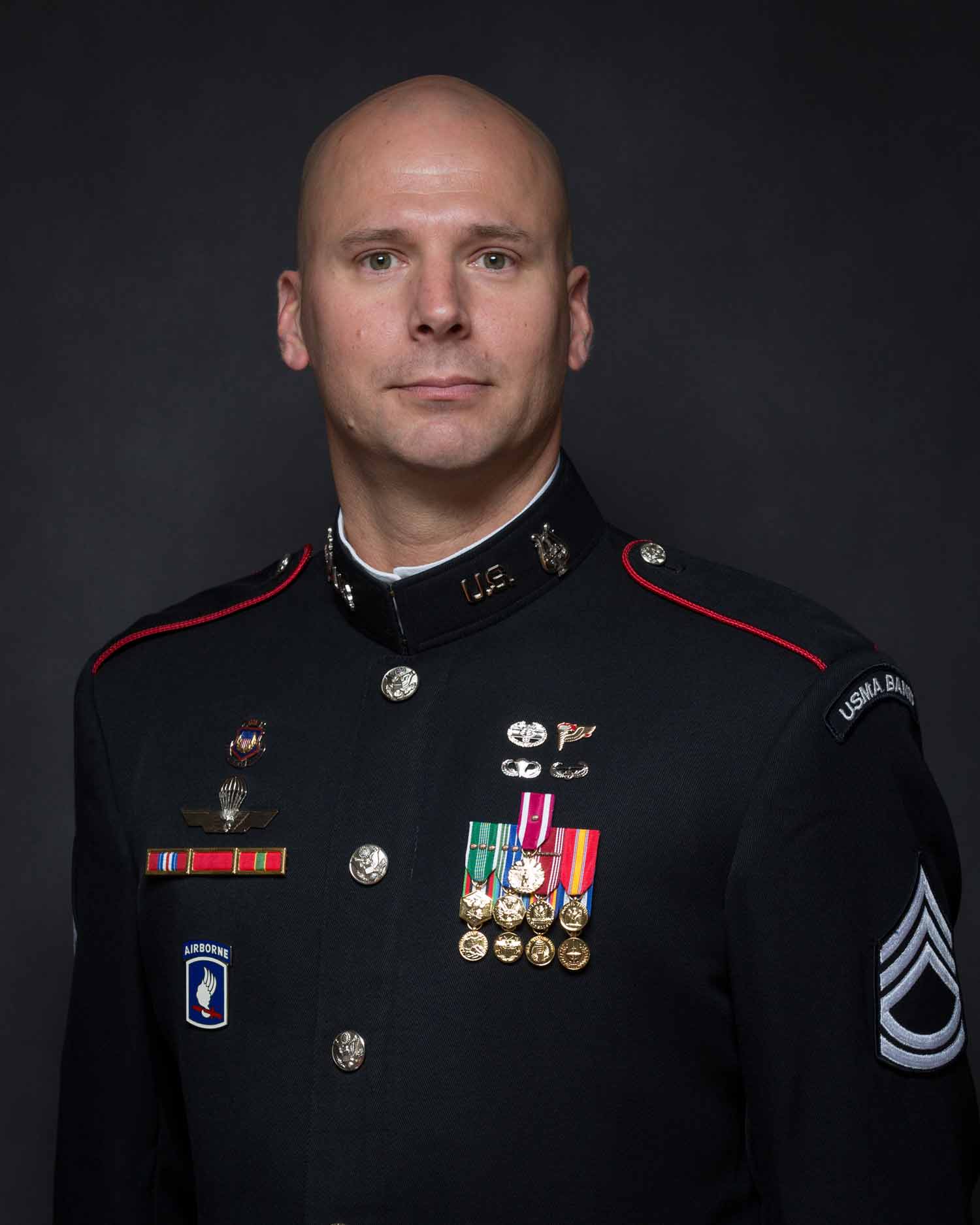 Sergeant First Class Joseph D. Hart Jr. is a native of Houston, Texas. After enlisting in the Army in 2000, Sergeant First Class Hart spent his first six years as a Line Medic with 1st Battalion, 24th Infantry Regiment out of Fort Lewis, Washington. During that time, he deployed to Iraq in support of Operation Iraqi Freedom (2004-2005) and was awarded the Combat Medic Badge.

He was then assigned to the 173rd Airborne Brigade Combat Team in Bamberg, Germany, from 2006 to 2009. He deployed to Afghanistan in support of Operation Enduring Freedom (2007-2008) and served as the Plans and Operations NCOIC responsible for all Eastern Theater medical evacuations.

Sergeant First Class Hart was subsequently assigned to the Kirk U.S. Army Health Clinic in Aberdeen Proving Grounds, Maryland, and served as the Plans, Training, Mobilization, Security, and Education NCOIC. During his three-year tenure, he was selected as the Non-Commissioned Officer of the Year (2010) by the Northern Region Medical Command. Sergeant First Class Hart was also selected by the Department of the Army to serve as an Advanced Individual Training (AIT) Platoon Sergeant and attended the school in Ft. Jackson, South Carolina.

Sergeant First Class Hart served as the Senior AIT Platoon Sergeant for Delta Company, 264th Medical Battalion, 32nd Medical Brigade. From 2012 to 2014, he was responsible for seven platoon sergeants and more than 1,400 Soldiers attending the Biomedical Equipment Repair Technician Course (68A) and the Medical Logisticians Course (68J), located at Joint Base San Antonio.

Sergeant First Class Hart also served with the Keller Army Community Hospital at West Point as the Operations NCOIC, and was responsible for medical coverage oversight in New York, New Jersey, Pennsylvania, and Massachusetts. He arrived at the West Point Band in December of 2017.

He is a graduate of American Military University, holding a bachelor’s degree in management with a focus in leadership, and is currently working on his master’s in national security. 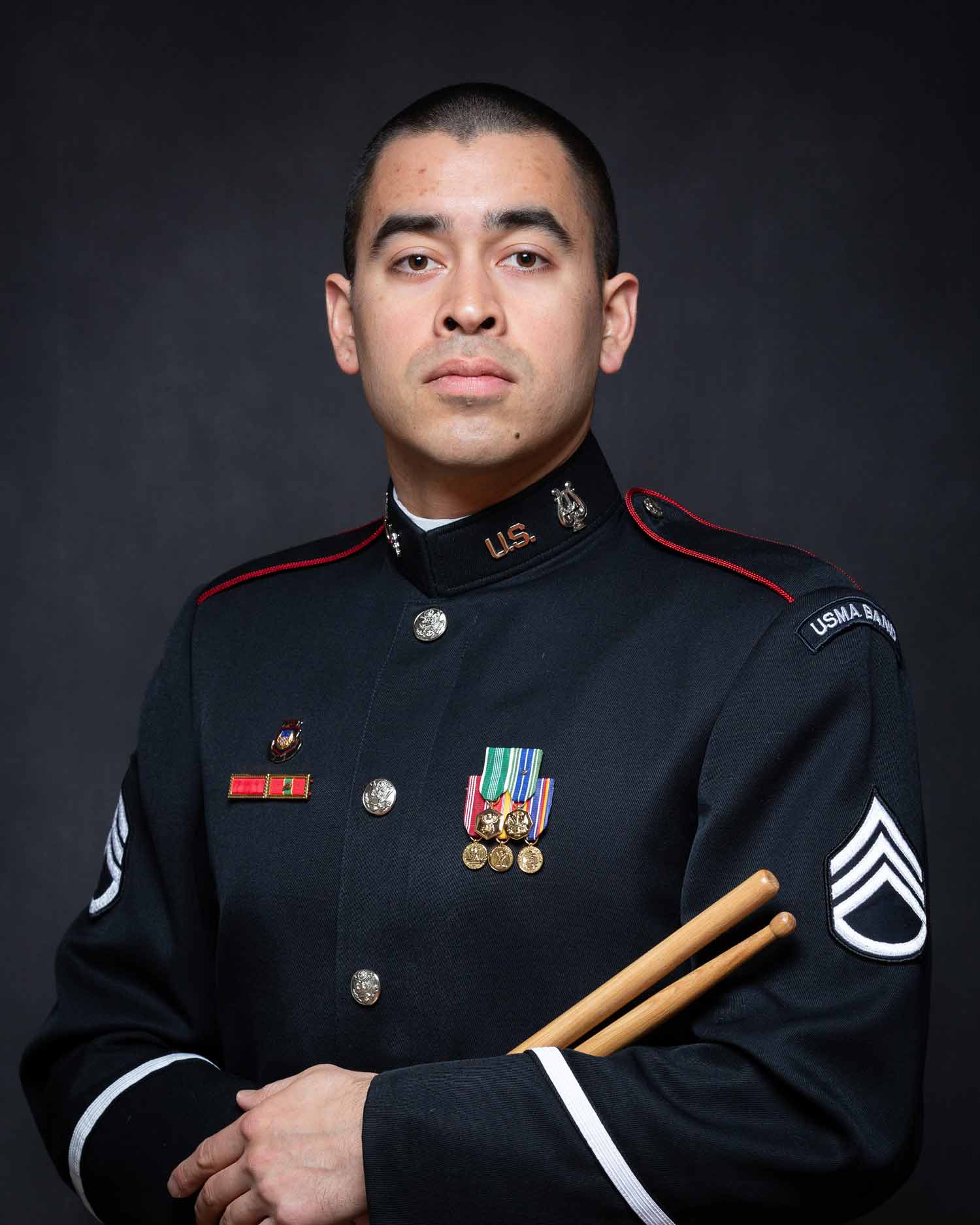 Staff Sergeant David Oriente, born and raised in a musical family in Blue Island, Illinois, began piano lessons at five years old and branched out into other percussion instruments soon after.

As a marching percussionist, Staff Sergeant Oriente has performed in Drum Corps International and Winter Guard International with groups such as Americanos Indoor in 2006, Pioneer Drum and Bugle Corps in 2007, Pioneer Indoor in 2009, Blue Stars Drum and Bugle Corps in 2009, and Rhythm X in 2010. In 2009, he was crowned Drum Corps International’s Individual and Ensemble Snare Drum Champion. In 2012, he was a performer, educator, and design consultant with European X Indoor Percussion Ensemble, based in the Netherlands.

Staff Sergeant Oriente studied percussion at Northern Illinois University under Robert Chappell and Dr. Greg Beyer, where he performed with the Percussion Ensemble, Wind Ensemble, and Husky Marching Band. Staff Sergeant Oriente also studied percussion at The University of Texas at El Paso under Dr. Andrew Smith, where he performed with the Jazz Band, Percussion Ensemble, and Symphony Orchestra, and coordinated batterie percussion for the UTEP Marching Miners.

Staff Sergeant Oriente began his Army career in the Military Police Corps before joining the Army Band field in 2016. As a Military Police Soldier, Staff Sergeant Oriente served on special duty assignment with the United States Army Europe Band and Chorus, where he performed with the Soldiers' Chorus and Concert Band. He has also performed with the 1st Armored Division Band and the 44th Army Band, and has toured across the American Southwest, Europe, and Kuwait.