Listen to bugle calls performed by Hellcat buglers every day at West Point. West Point is the only military installation in the United States to still have live bugle calls for reveille and retreat.

Taps | Stories Behind The Sound

The buglers of the West Point Band's Hellcats share their stories derived from years of sounding taps for fallen Soldiers. This clip gives you a glimpse into what it's like to be the Soldier behind the bugle.

Learn more about the West Point Band's field music group, The Hellcats, and their mission.

The West Point Band's field music group, The Hellcats, is comprised of bugles, piccolos, and drums, and serves as a showpiece for the United States Army and the United States Military Academy. The Corps of Cadets gave The Hellcats their name as a friendly jibe in response to the group's early morning playing of the wake-up call reveille every day at West Point. As the Army's first and only remaining field music group, The Hellcats trace their heritage back to the American Revolution, when General George Washington established the garrison of West Point and appointed a fifer and drummer for signaling in camp. 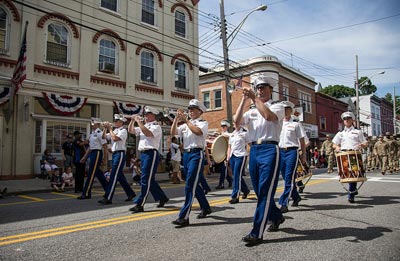 The modern-day Hellcat is handpicked through a rigorous and highly-selective audition process, ensuring that only the most technically-proficient musicians are hired. A contemporary Hellcat is expected to perform with little to no notice at the largest media outlets in New York City and around the world. This has included representing the Army on ABC, NBC, FOX, and BBC1 for their national broadcasts, and collaborating with stars of all genres.