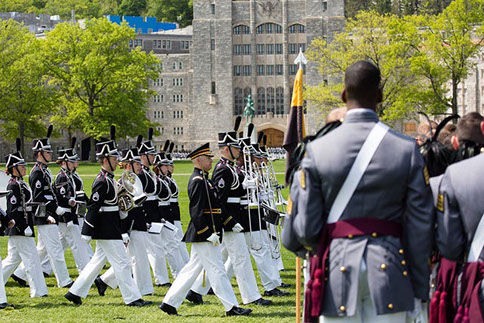 Founded in 1817, the West Point Band is the Army’s oldest continuously serving active duty band, tracing its roots to the Revolutionary War. The band is comprised of active duty Soldiers drawn from the finest music schools in the country. Marching music at West Point began at the time of the American Revolution. Companies of minutemen stationed on Constitution Island, across the Hudson River from West Point, had musicians assigned to carry out signaling and marching duties both in camp and on the battlefield. At least fifty-five field musicians crossed the Hudson River in 1778 with General Parsons' 1st Connecticut Brigade and established West Point as a permanent post. Although many changes have occurred over the years, music continues to be an integral part of daily life for the cadets and Soldiers at the Academy. 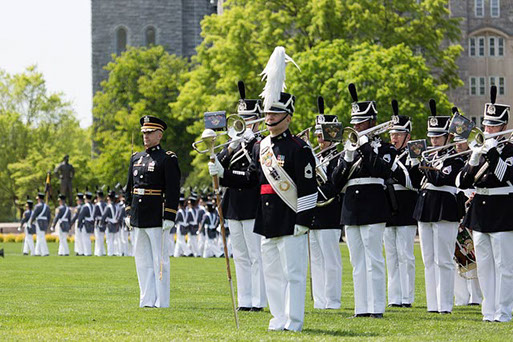 In General Washington's time, the marching band consisted solely of fifes and drums. During the Civil War, West Point bandsmen used instruments pointed backward over their shoulders so the cadets marching behind them could hear the music and keep in step. At every point in our nation's history, both Soldiers and the Corps of Cadets have marched to the martial airs of the Marching Band at West Point.

Today's Marching Band continues the tradition by performing music that spans our military history. Accomplishments include marching in inaugural parades for fifteen American presidents, leading the New York City Veterans Day Parade on Fifth Avenue, performing at the opening of the new Yankee Stadium, performing in support of the "Hiring Our Heroes" broadcast on The Today Show, and annually "marching in" the Corps of Cadets for the Army vs. Navy football game. While military ceremonies are the band’s specialty, productions of Army Football halftime shows remain an important function of the band. Guest speakers during halftime productions have included Astronaut Buzz Aldrin, Chairman of the Joint Chiefs of Staff Gen. Martin Dempsey, Mayor Rudy Giuliani, and Gen. Norman Schwarzkopf. The band has also saluted veterans during halftime performances at MetLife Stadium for both the Giants and the Jets.

Whether drawn up in parade formation, providing music at an Army football game, or performing a solemn military funeral, the West Point Band on the march is an impressive sight. Performing before world leaders and top military representatives, the band displays the precision, polish, and professionalism of today's Army.