The history behind the music of one of West Point’s favorite tunes
Staff Sgt. Natalie Wren

As we near the end of spring, West Point prepares to celebrate the achievements of the graduating class and commission them into Army’s Officer Corps. As the Army’s newest officers, the graduates will remove their Cadet Grays in exchange for Army Blues, transitioning from cadet to 2nd lieutenant in the U.S. Army.

Leading up to the “big day,” one of West Point’s most poignant traditions is the graduation parade, which takes place the day before commencement. The graduation parade is the most involved Academy pass in review of the year, in which the entire Corps of Cadets convenes on the Plain to witness the transfer of seniority from the graduating class, known as the “firsties,” to the junior class, the “cows.” 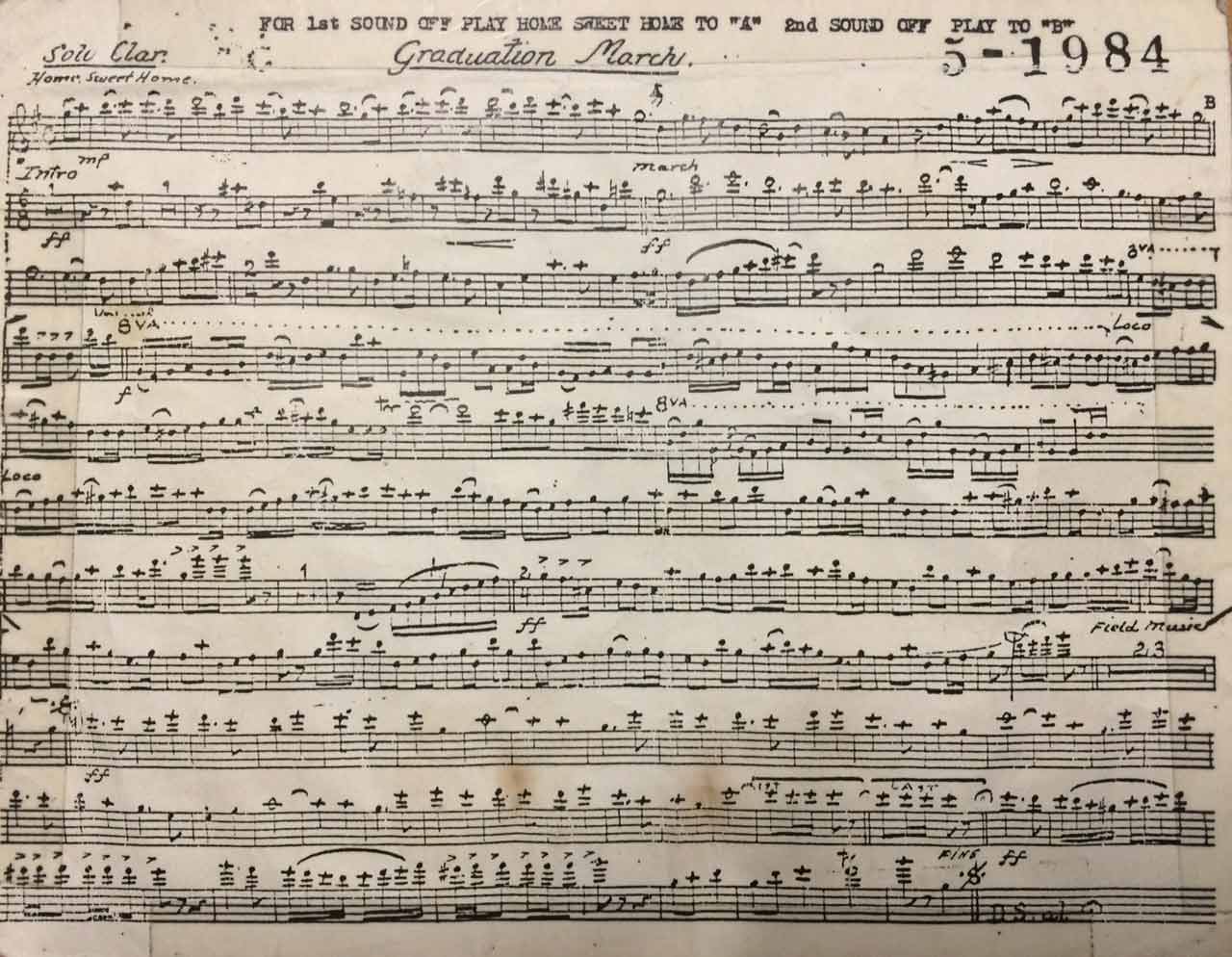 At every Academy review, the West Point Band performs military marches throughout the ceremony to keep formations in step as they march across the Plain, and to add a sense of occasion to the proceedings. Of all the music that the band plays on the field, the Graduation March, which is performed exclusively for the graduation parade, is perhaps the most extraordinary.

“Home! Sweet Home!” (1823): composed by Sir Henry Rowley Bishop, with lyrics by John Howard Payne. This song was reputedly banned from being played in Union Army camps during the American Civil War for being too redolent of hearth and home, which allegedly led to Soldier desertion.

“100 Days ’til June” (1938): composed by Lt. Col. Francis E. Resta. This song served as the overture to the annual 100th Night Show in 1938. The show is produced by the firstie (senior) class. It marks the 100 days leading up to graduation and encompasses the firsties’ experience of cadet life at West Point. Even today, the cadets continue to perform this song at the annual 100th Night Show.

“Dashing White Sergeant” (1826): by Sir Henry Rowley Bishop, with lyrics by British General John Burgoyne. The melody was originally a Scottish reel (a quick dance in duple meter). It was later adapted as a popular song during the Mexican War, known as “The Female Volunteer for Mexico,” before eventually becoming an established military march.

“Wedding March” (1842): composed by Felix Mendelssohn, this is a movement from his incidental music to Shakespeare’s A Midsummer Night’s Dream. Egner incorporated this melody due to the flood of weddings that occur on and off-post immediately following graduation. (Cadets are not allowed to be married while attending the Academy, but the church bells quickly ring once they become officers!)

“The Girl I Left Behind Me” (c. 1810): composer unknown, this is a British folk song from the Elizabethan age. 1810 is the earliest known version of this melody, though an Irish text attributed to the song dates from 1792. It is said that Army Soldiers adopted it after hearing a British prisoner singing the melody during the War of 1812.

“Auld Lang Syne” (1788): Scotland’s Robert Burns penned this well-known poem, and it was set to music in 1799. The melody is a traditional folk song of unknown origin, listed only as #6294 of the Roud Folk Song Index. It is often sung to celebrate the New Year at the stroke of midnight, but has also been heard at funerals, graduations, and as a farewell or ending to other occasions. 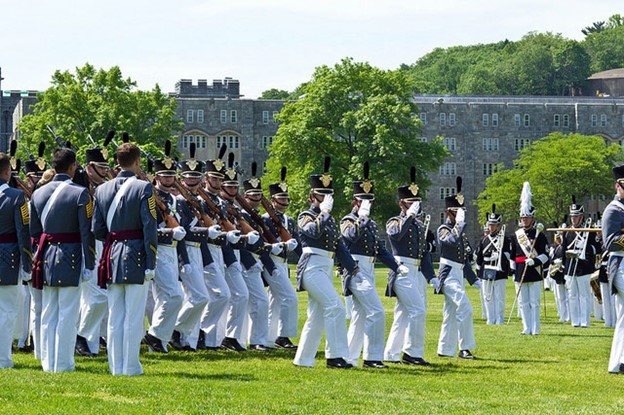 The Graduation March serves a military function that is unmatched when comparing it to other old West Point tunes. While military marches can often be used interchangeably in ceremonies, the Graduation March is performed specifically during the “sound-off” sequence at the graduation parade. For almost a century, every graduating cadet has stood at parade rest while the band performs this march, trooping the line in front of the U.S. Corps of Cadets.

The scenario is this: the U.S. Corps of Cadets marches onto the Plain, with the firsties marching on for the last time in their cadet career. The entire formation is called to parade rest. The adjutant yells, “Sound-off!” and the announcer then reads:

This march across the front of the line is said to have originated with the crusades. The troops offering themselves for service were drawn up in a long formation and the band countermarched only before those chosen to serve.

The drum major then has the band bring instruments up and conducts the slow first phrase of “Home! Sweet, Home!” which is then followed by a rousing introduction to Resta’s “100 Days ’til June.” The band promptly steps off to march in front of the Corps of Cadets, proudly on display for visiting family, friends, and VIPs in attendance. The band continues the medley with “Dashing White Sergeant,” Mendelssohn’s famous “Wedding March,” and “The Girl I Left Behind Me.”

As the band nears the end of the corps, the drum major gives a counter-column signal to turn the band around. Here the field music group, The Hellcats, performs an original bugle strain, which allows the band to perform the counter-column. Once completed, the drum major gives a sharp, “Forward march!” with the mace and the band steps off to “Auld Lang Syne.” The band proceeds to march back to its original position on the field, where it concludes the sequence with a reprisal of “Home! Sweet, Home!”

The Graduation and Commissioning Ceremony

The day after the parade, the graduating class will assemble one last time for the much-anticipated graduation ceremony, held at Michie Stadium. The commencement ceremony is often presided over by the nation’s most notable figures, including the Chairman of the Joint Chiefs of Staff, Secretary of Defense, Vice President, or even the President of the United States.

Though the speeches from these dignitaries are exceptionally meaningful to the corps, the words that the graduating class cherishes most come from the cadet first captain at the end of the ceremony: “Graduating class, dismissed!”

As the newly commissioned lieutenants throw their hats in the air (the hats are traditionally collected by young children in the audience as souvenirs), the West Point Band marks the momentous occasion by performing the Graduation March once again.

This year, West Point’s graduation events will not be open to the public. However, graduation week events, including the graduation parade and commencement ceremony, WILL be livestreamed. Visit www.westpoint.edu/graduation2021 for more information on how to view each event and celebrate these remarkable cadets!

Thank you to Retired Sgt. Maj. Christopher Jones for the use of his original research on the Graduation March.