Passing the Baton: The Lineage of the West Point Band Drum Majors

Bird song, tulips, and the Easter Bunny. Sure, these may be iconic symbols of spring for many, but if you were to ask any member of the West Point Band what spring looks like, they are more likely to say, “It’s marching season!” As buds start to bloom on the trees at West Point, the West Point Band can often be found marching on the Plain at the U.S. Military Academy, in preparation for the many Academy reviews leading up to graduation. And leading those marching drills is a very important band member: the drum major.

Just like live theater, any marching mission — whether it is a nationally broadcast parade in New York City or an intricately-planned military review at West Point — never goes perfectly. There are just too many variables. The ceremony may be interrupted by a sudden storm, or it might be derailed by an errant dog who decides, for whatever reason, that it wants to tag along as the newest band member. (This has been known to happen on occasion!) That’s showbiz. 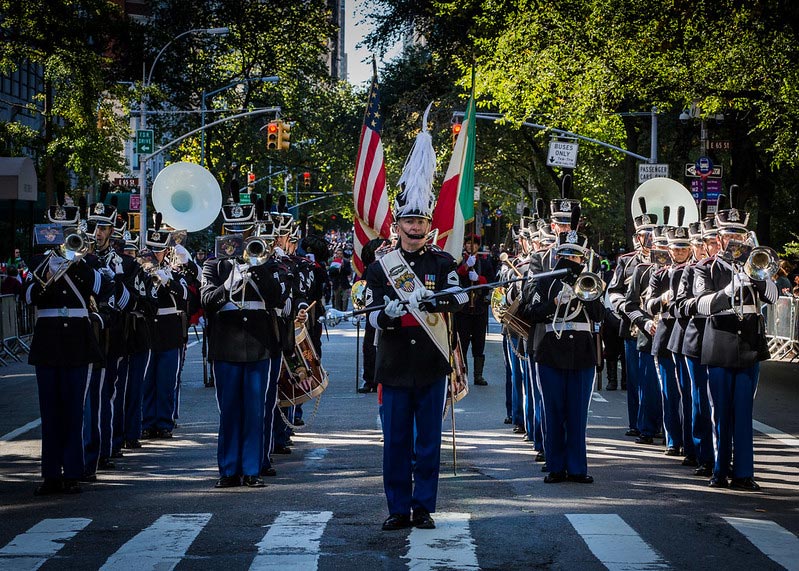 “It is an honor and privilege to serve as a drum major for this incredible band,” remarked Master Sgt. Nathan Eby, one of the band’s assistant drum majors. “Little did I know that being able to think clearly while under pressure is one of the most important traits a drum major should possess. It’s not uncommon for ceremonies to go awry, and the drum major’s job is to adjust course like nothing happened.” Whether it is Mother Nature or some other unexpected blunder, it is often the drum major’s corrections that can recalibrate a formation, essentially saving the ceremony. 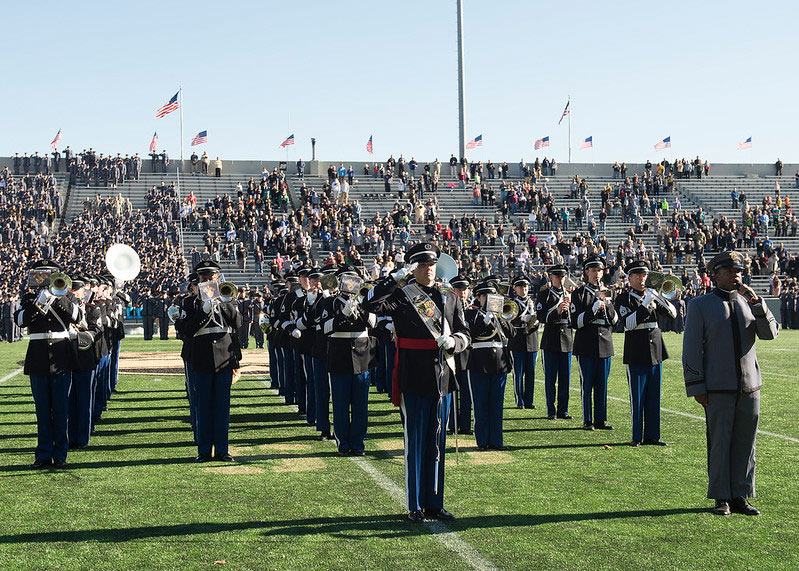 The position of drum major at the U.S. Military Academy is as time-honored and rich in tradition as the history of military music, with drum majors leading formations at West Point since 1777. Traditionally at West Point, the drum major came from the ranks of drummers. The Teacher of Music at the Academy chose the best drummer to train Army musicians as drum major. Today, the drum major can be any band member who auditions. Currently, the West Point Band Drum Major is Sgt. Maj. Glenn West, a bassoonist, with Assistant Drum Majors Master Sgt. Nathan Eby, a percussionist, and Sgt. 1st Class Nicole Caluori, principal French horn and now the band’s first female drum major.

The role of the drum major originated in the British Army in 1650 with the Corps of Drums, and it was later adopted by the Continental Army during the Revolutionary War. The position entailed several duties, including training and leading the drum corps, maintaining high standards of military dress, leading drill and ceremony, and administering discipline.

Throughout military history ― from ancient Rome to 19th century Europe ― military officers disciplined their subordinates with grisly punishments. Frederick the Great, the famous 18th century Prussian leader, famously remarked that his soldiers must fear their officers more than they fear the enemy.

In British and American Army history, the most common punishment was a public flogging using the notorious “cat o’ nine tails.” There were many roles to play in these floggings, from commanding officer to judge advocate, but it was the drum major who oversaw the flogging and had the drummers administer the punishment in front of the entire regiment. Books on military instruction noted the importance of the drummers’ role by saying, “When a soldier is to receive the corporal punishment of flogging with a cat o’ nine tails, it is inflicted by the drummers of the regiment in presence of all the officers and soldiers.” 1 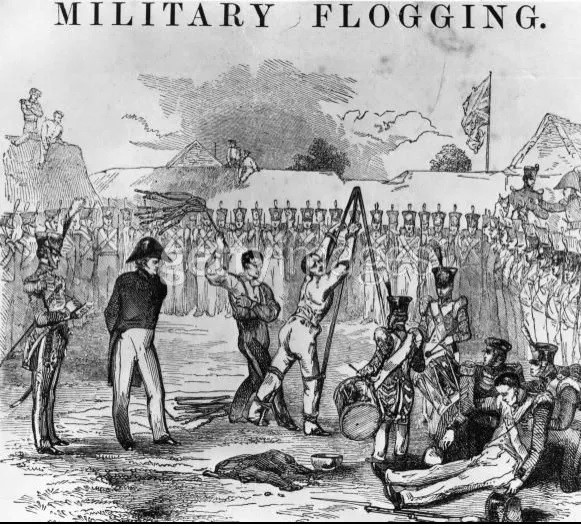 As horrific as we view these punishments today, such events did take place regularly at West Point, and they were indeed administered by the drum major. There is a detailed account of one poor fifer, Samuel DeWees, who was stationed at West Point in the summer of 1777, and who received multiple floggings by his drummer colleagues for various misdemeanors. Through today’s lens, it is difficult to understand the use of such violent corporal punishment for Soldiers, whose transgressions were often as minor as sporting a disheveled uniform. The U.S. Army has come a long way from its early days of discipline, having abolished floggings in 1861. We now refer to the Uniform Code of Military Justice for legal dealings. So, this writer is relieved to note that because the tradition of corporal punishment is no longer utilized today in the military, the West Point Band’s drum majors have since removed “administer floggings” from their to-do list.

According to Retired Sgt. Maj. Joe Horvath, who was drum major from 1983 to 1992, “The complete record of the band at West Point lives on in the uniform of the drum major. From the mace and baldric to the engineer red of the sash and piping on the epaulettes, our history marches with us every time we take to the Plain.”

The drum major uniform has evolved over time, with each part being significant to the function or symbolism of the position. Today, the drum major’s uniform consists of high-collar tunic over white or blue trousers, with red sash worn around the waist, cadet saber, baldric worn diagonally across the torso, signaling mace, and tar-bucket hat with unique white “coq” plume.

For a drum major, the mace is a visual instrument of the office. The clearer the mace command, the more precise the band will be behind the drum major. Today’s drum major can present a very distinctive strut while “walking the mace,” or conduct a series of high baton tosses, often during the playing of the Army Song.

From the West Point Band’s early days, the drum major used an American signal baton to relay commands to the band. In 1977, the band adopted the English style baton, which utilized a large mace to signal the band. Inscribed on the ball of the mace is the Academy crest with gold leaf laurels on the sides, symbolizing the Meritorious Unit Citation awarded to the band by President Franklin Roosevelt. On the center of the ball is inscribed 1812, for the inception year of the company that would become the West Point Band (though the band was officially established in 1817). The staff is crafted of malacca cane and interwoven with a sterling silver chain that represents the ancient whip that drum majors formerly carried to enforce discipline. 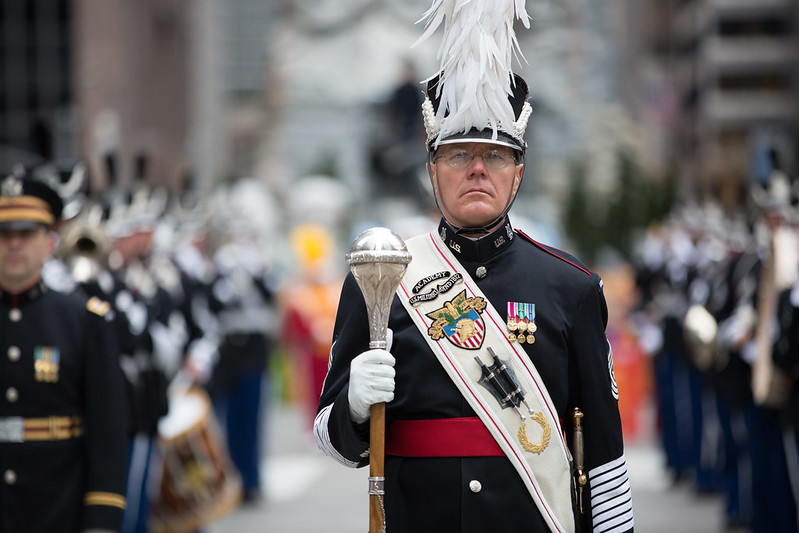 Whether the drum major is leading the band down 5th Avenue in New York City or on the Plain at West Point, the West Point Band’s drum majors have always upheld their legacy with confidence and poise. Academy reviews are often open to the public, so be sure to stay connected with the band for upcoming marching events!