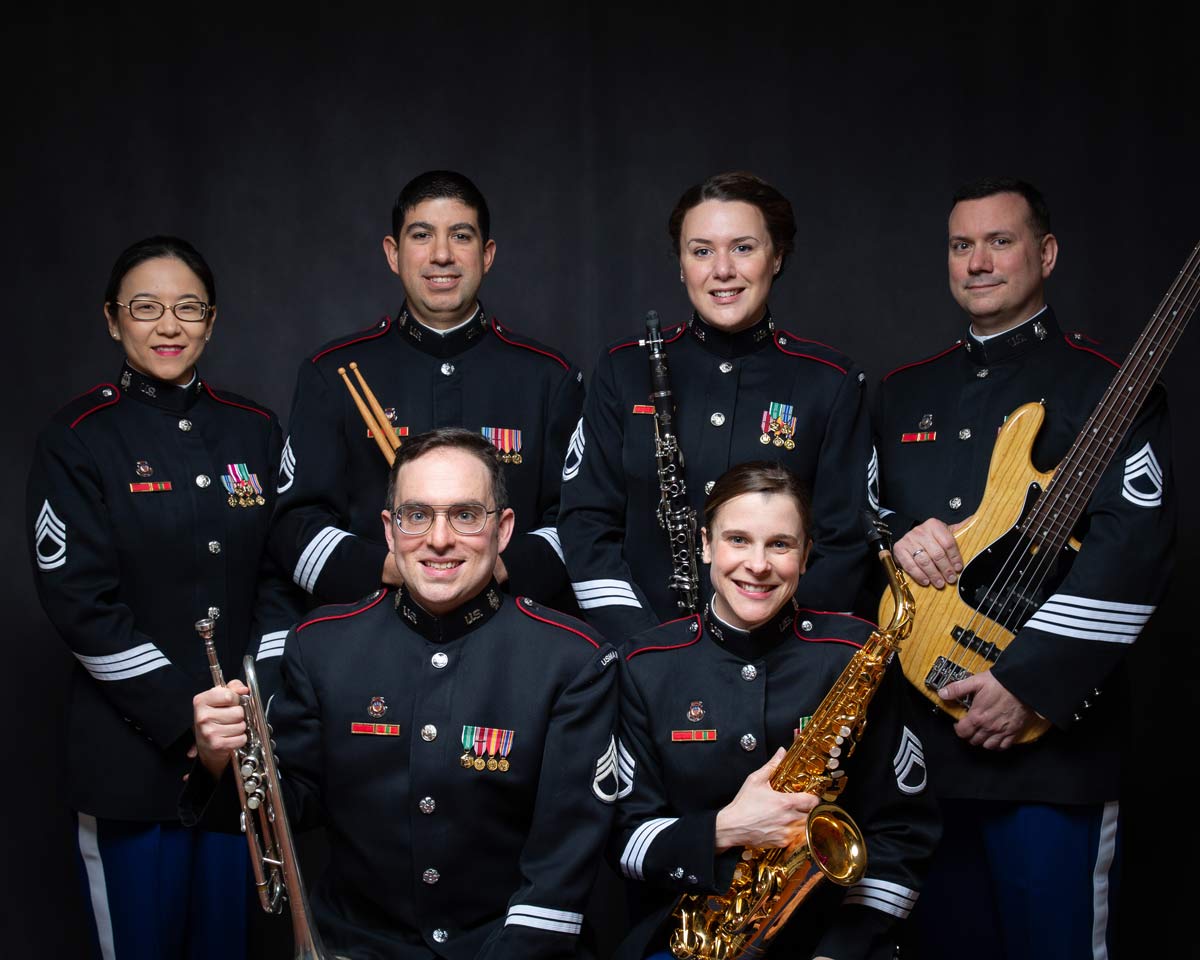 The West Point Band’s Quintette 7 selected its name as a witty homage to composer Raymond Scott, incorporating elements of two of his performing ensembles’ names (The Raymond Scott Quintette and The Secret 7). The group, a mixed sextet of three rhythm players and three horns, is comprised of members of the West Point Concert Band.

Quintette 7 convened in the fall of 2008 for what would have been a one-time performance of the quintet music of Scott. In review of this concert, Scott’s archives director Irwin Chusid remarked that, “Quintette 7 performs Raymond Scott quintet classics with a restrained passion befitting the elegance of the compositions… There’s no attempt to overwhelm or overplay; they let the works breathe. Scott created the notes; Quintette 7 provides the sparkle.”

Encouraged by the success of this first performance, Quintette 7 established itself as an official performing ensemble and continues to delight audiences with its unique repertoire today. Much of the group’s current repertoire was arranged specifically for this unusual instrumentation by members of the West Point Band.

As this dynamic ensemble has developed over the years, Quintette 7 has been featured on many interesting programs, including Musicians@Google in New York City, the Fox Network broadcast of the West Point Holiday Show, and the annual Trophy Point concert series for the beloved concert “Kid’s Night with Quintette 7.”

Members of Quintette 7 come from varied musical backgrounds, having worked with many orchestras, wind ensembles, popular musicians, and chamber ensembles throughout the country.

Quintette 7 is proud to serve the United States Army as one of the chamber ensembles of the West Point Band, presenting educational and entertaining performances of popular and lesser-known repertoire to appreciative audiences. 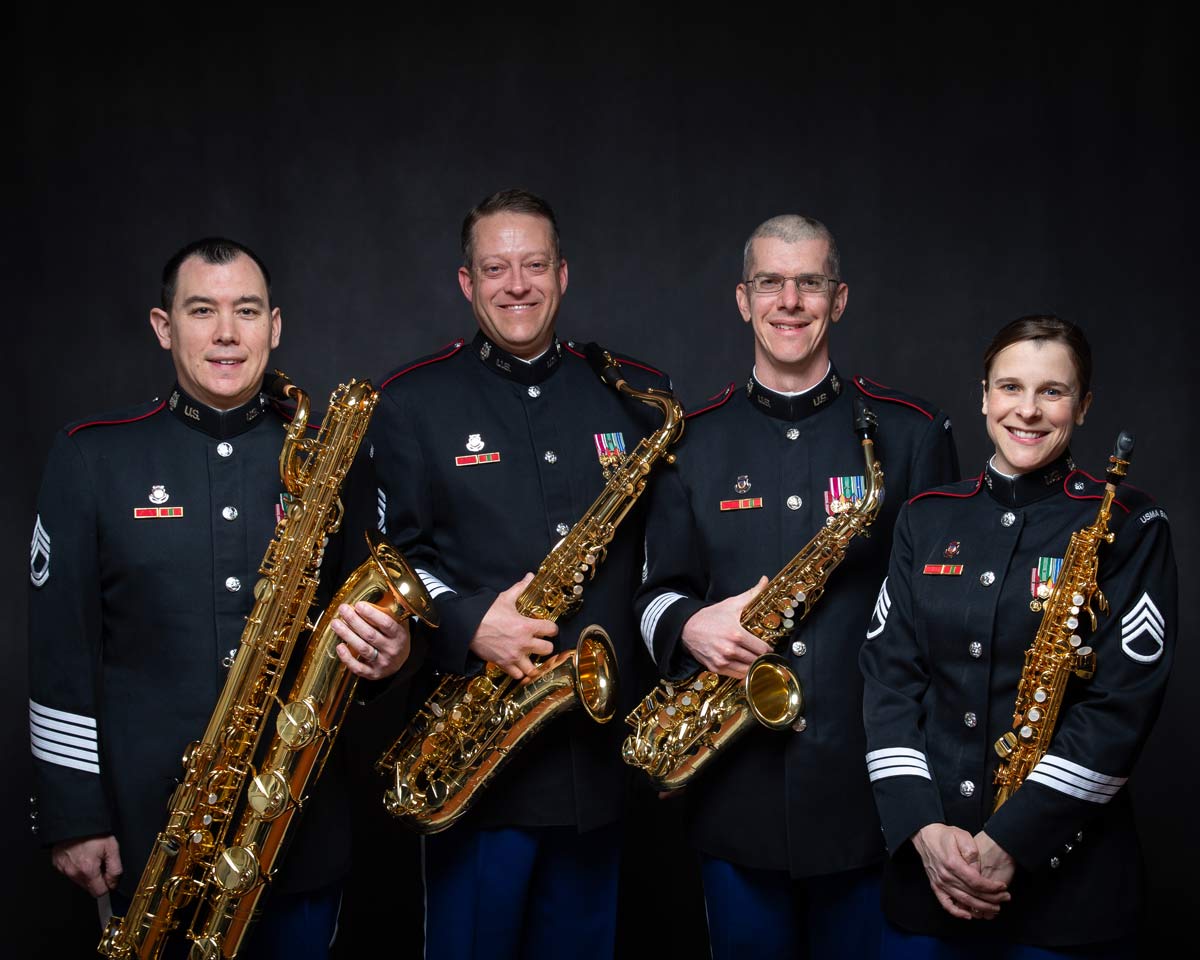 The West Point Saxophone Quartet has appeared in a number of high profile and significant venues, including major universities throughout the country. Performances have included collaborations with the UNCG Wind Ensemble, the Long Island Symphonic Winds, and the Virginia Wind Symphony. The quartet has also been featured on the prestigious Barge Music Series.

Well-versed in historically significant saxophone quartet repertoire, the group focuses on a repertoire of modern music. The West Point Saxophone Quartet has presented the music of monumental twentieth century composers, performing Iannis Xenakis’ XAS at the 2007 Midwest Clinic and Gyorgy Ligeti’s Six Bagatelles at the 2008 NASA Biennial Conference at the University of South Carolina. 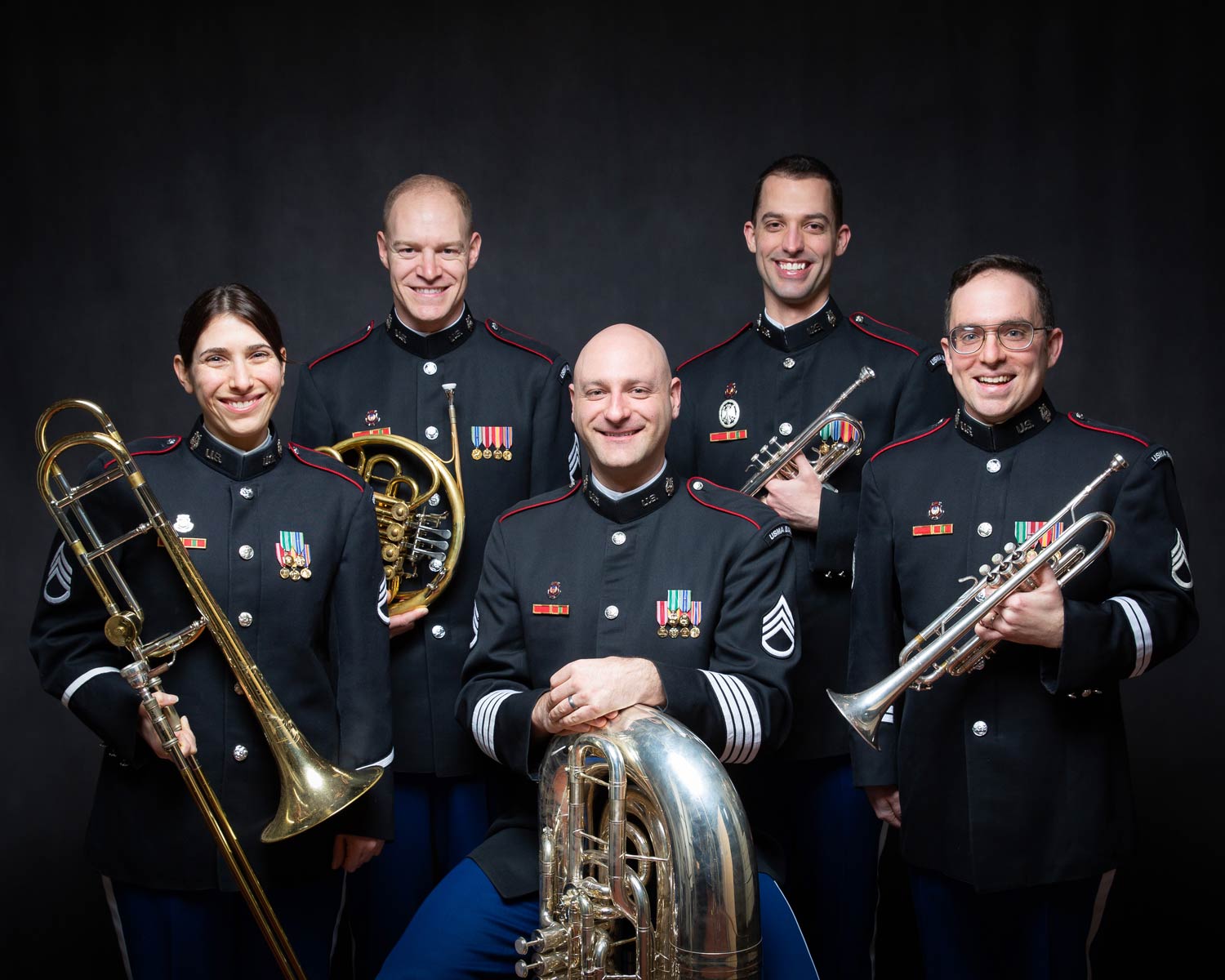 The Regimental Brass Quintet (formerly the Storm King Brass) is comprised of musicians in the West Point Concert Band. Founded in 2003, the ensemble presents a diverse repertoire, from Renaissance to modern works, to its audiences. The ensemble has also been featured throughout the country, including performances in Florida, Oregon, Connecticut, South Dakota, Utah, and Iowa.

In support of military functions, the quintet has entertained the United States Corps of Cadets and performed for many visiting dignitaries and heads of state at West Point. Additionally, the ensemble actively performs throughout the New York metropolitan area. 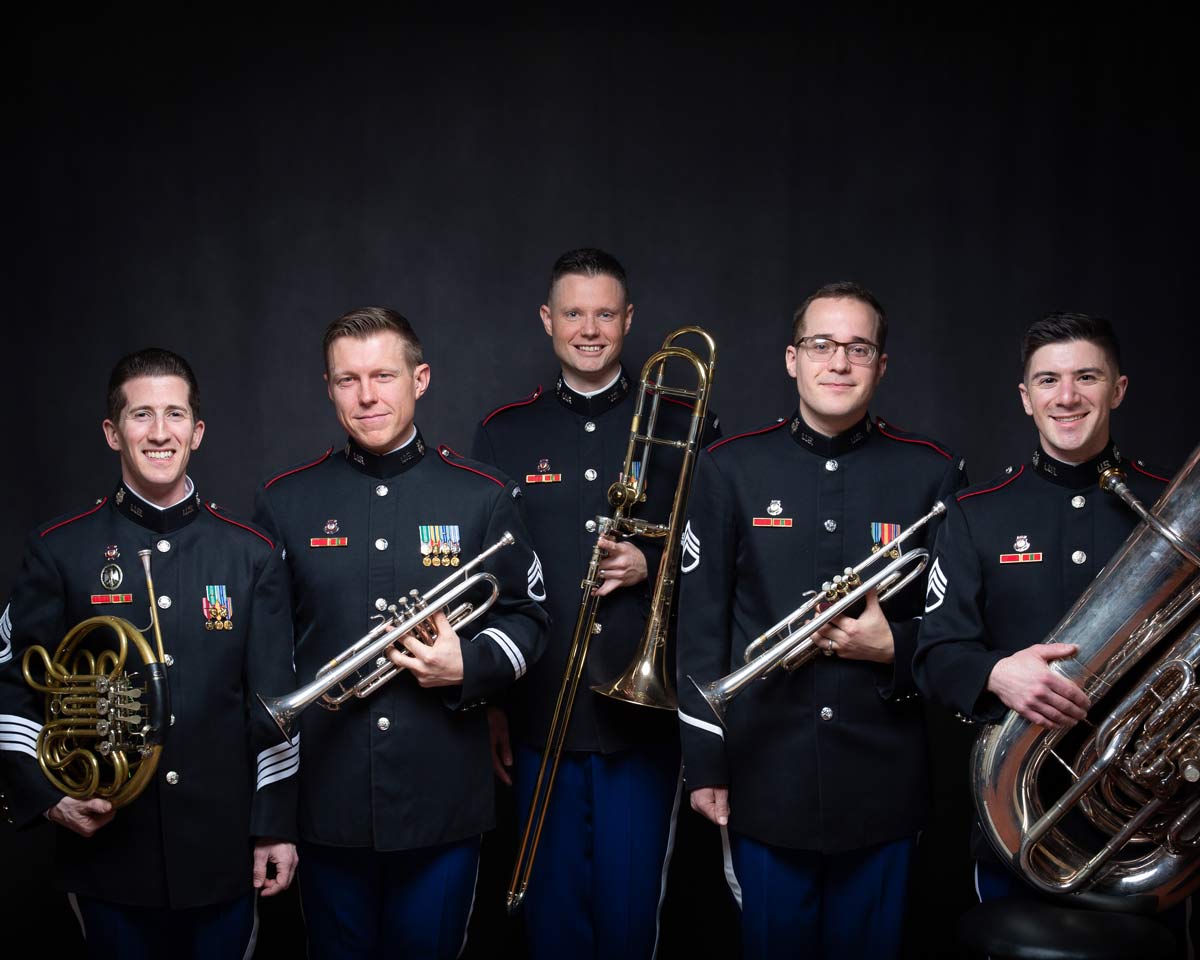 The Academy Brass Quintet is comprised of musicians from the West Point Concert Band. Founded in 2008, the group has been delighting audiences across the tri-state area with its diverse repertoire. Academy Brass has performed the National Anthem at Yankee Stadium, and has been a featured chamber ensemble on the nationally televised West Point Holiday Special on Fox News. As members of the United States Army stationed at the United States Military Academy, Academy Brass is proud to tell the West Point story through music. The group also provides musical support in a variety of military ceremonies, both at West Point and in the surrounding area. In addition to its military duties and chamber recitals, Academy Brass performs at community events and education outreach at local schools. 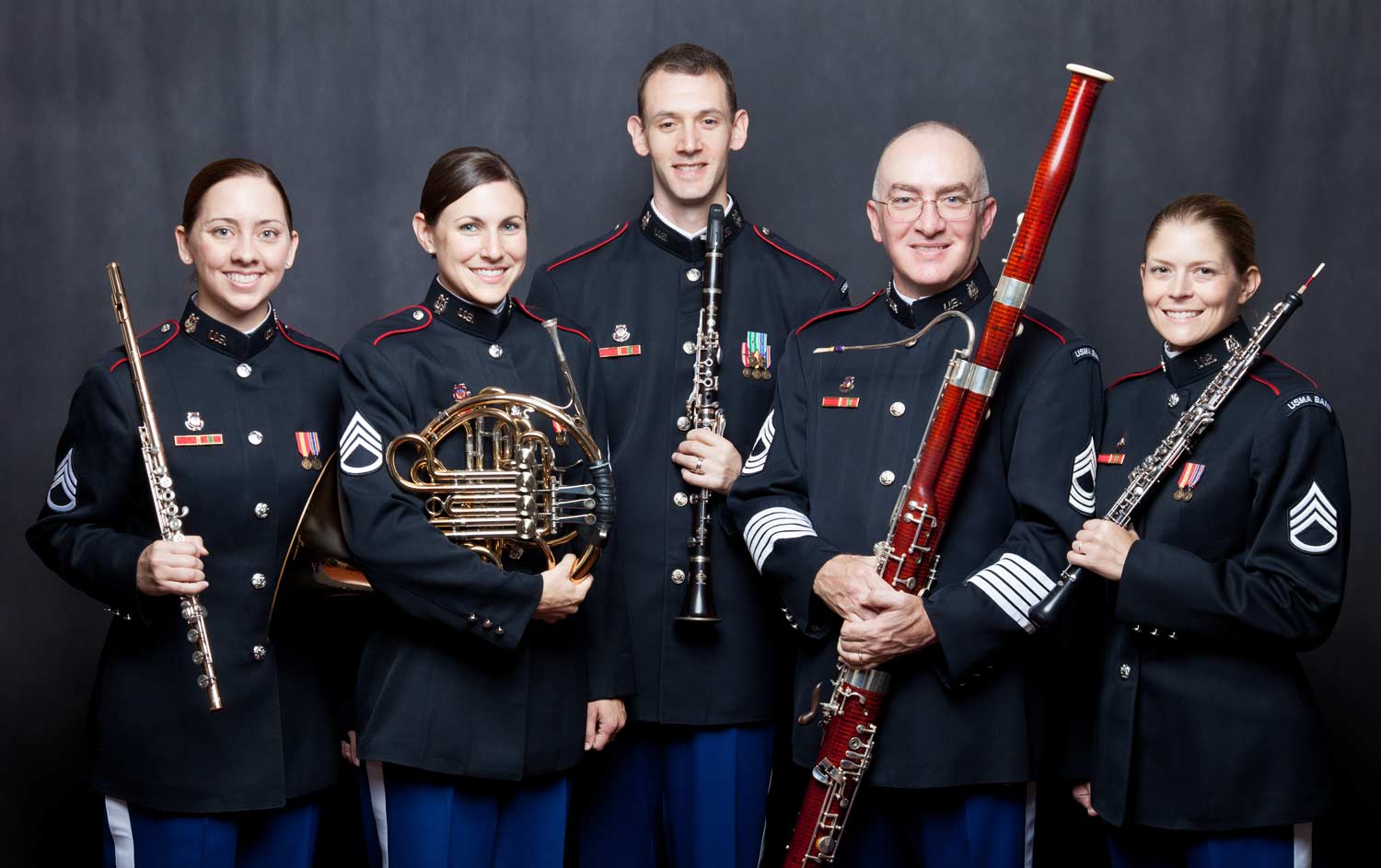 The West Point Woodwind Quintet is made up of members of the West Point Concert Band. The group performs at many different events, such as military social functions, school presentations, and formal recitals.

The West Point Woodwind Quintet has supported the United States Recruiting Command with tours of high schools and colleges to promote Army bands and audition prospective candidates. These tours have taken the quintet to Connecticut, Pennsylvania, North Dakota, New Jersey, and Florida.

Outside the realm of the military, residents of local communities have regularly enjoyed the quintet on recitals as part of the Academy Band's chamber music series. The West Point Woodwind Quintet has been a staple ensemble for many years, and continues to be an important musical emissary of the West Point Band and the United States Army. 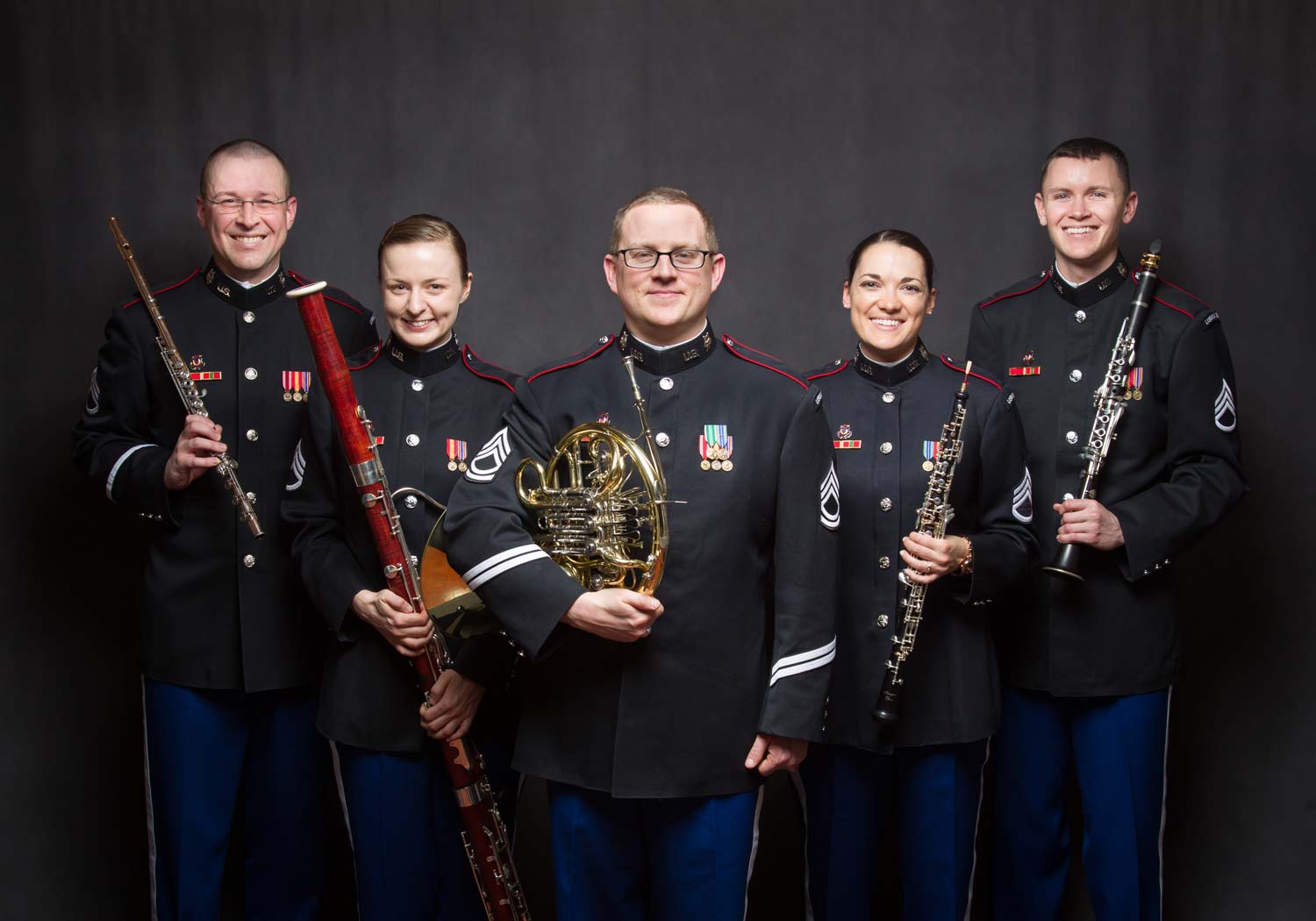 The Academy Wind Quintet presents a varied and colorful program of virtuoso chamber music for winds, featuring repertoire ranging from the late eighteenth century courts of Europe to the contemporary masters of the twentieth century.

This ensemble comprises players from within the West Point Concert Band and carries on the great tradition of woodwind playing that has existed at West Point since 1815. The members of the quintet are committed to bringing a wide variety of musical styles to their programs, including turn-of-the-century waltzes, popular music, and educational works like Peter and the Wolf.