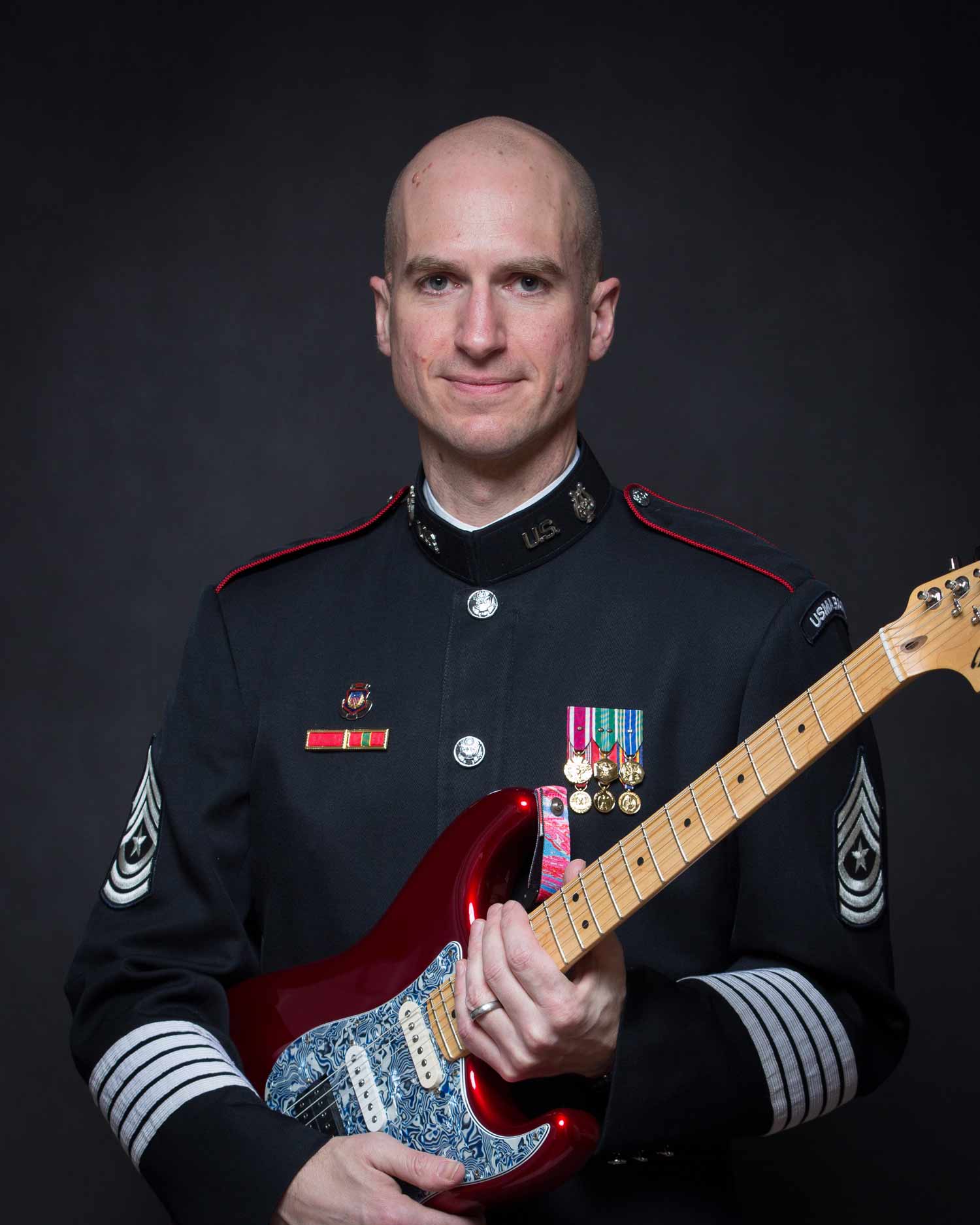 Sergeant Major Brian Broelmann joined the West Point Band as a saxophone player in 2001, after a brief stint teaching music in Florida, New York. While serving in the West Point Concert Band, Sergeant Major Broelmann developed his skills on multiple string instruments, eventually becoming the band’s guitar player in 2012. He holds degrees in music education and saxophone performance from the Crane School of Music at SUNY Potsdam.

Sergeant Major Broelmann currently serves as the Concert Band Element Leader. He performs on saxophone in the Marching Band and guitar in the Concert Band, and has even been known to play accordion and theremin when the opportunity arises. One of his greatest honors is accompanying the band’s vocalists in performances for veterans groups and community outreach organizations. 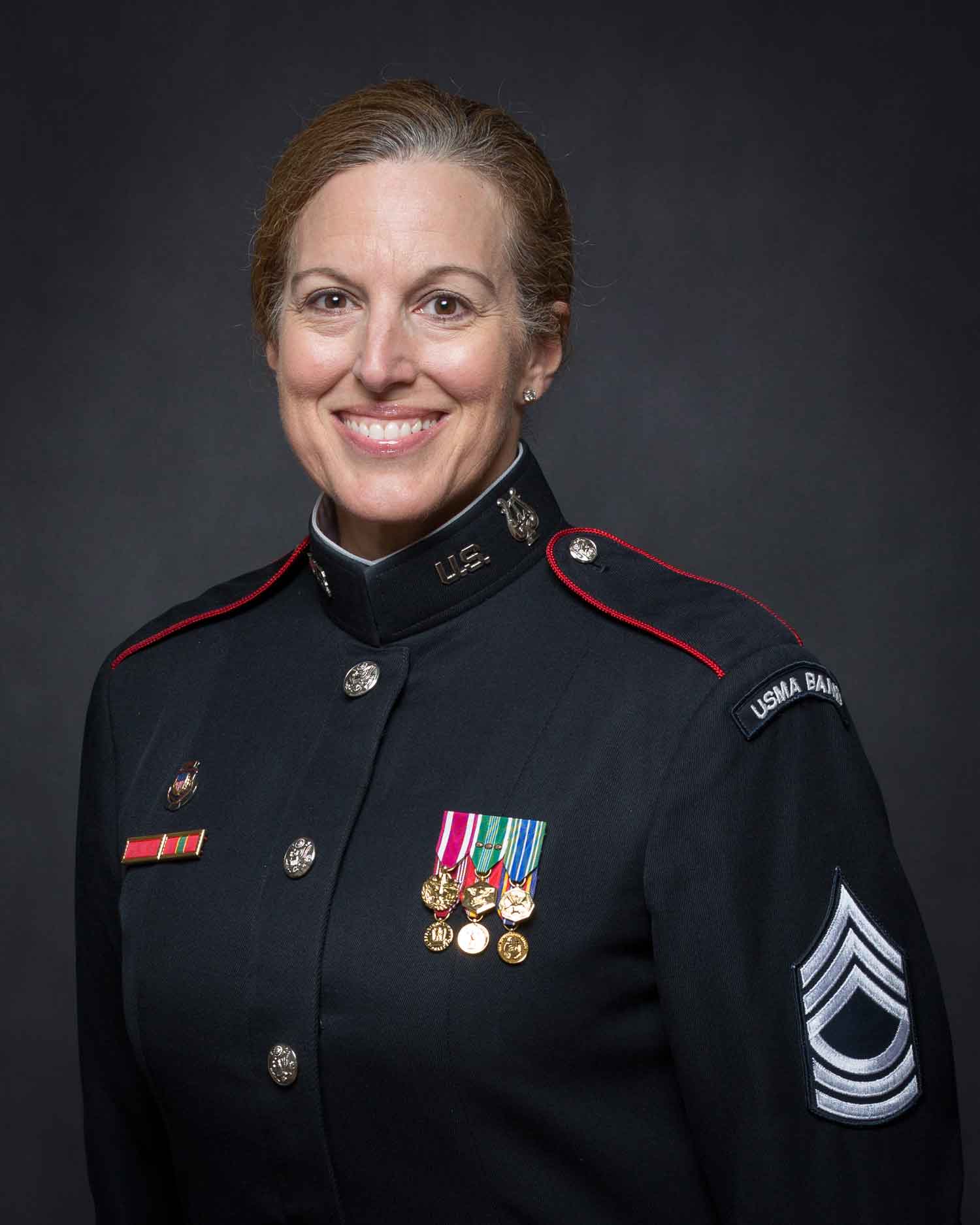 Master Sergeant MaryKay Messenger is a native of Newburgh, New York, and a well-known soloist throughout the Hudson Valley region, performing classical, Broadway, jazz, and popular music. She is the premier vocalist for the West Point Band and first sang with them at their season finale 1812 concert in 1980, at the age of 12. She continued throughout the years as a guest vocalist for a variety of concerts until she joined the Army in 1996. Master Sergeant Messenger performed as a soloist for a European Summer Broadway Tour and has appeared locally in several musicals including Godspell, Shenandoah, and Grease. She has sung operatic roles in Montclair, New Jersey; with the Amato Opera Theatre in New York City; and at the Bardavon Opera House in Poughkeepsie, New York. She has performed with the famous Irish Tenors, Frank Patterson, John McDermott, the Nexus percussion ensemble, and soprano Sylvia McNair.

Master Sergeant Messenger performed as a featured soloist for the West Point Band’s Bicentennial Concert in Carnegie Hall, the Royal Norwegian Military Band in Oslo, Norway, and as the first American military vocalist to perform with the military band of the People’s Liberation Army in Beijing, China. She recently performed as a soloist for the Boston Pops 2013 Holiday Concert at Eisenhower Hall Theatre. She has sung the National Anthem for many high-profile events, such as the 2012 Bruce Springsteen concert “Stand Up for Heroes” at the Beacon Theatre in New York City, at Madison Square Garden for the New York Knicks, at the opening bell of the New York Stock Exchange, and at Radio City Music Hall for World Championship Boxing. She has also sung regularly at Yankee Stadium, including a live, televised performance of "God Bless America" for Game 1 of the 2009 World Series. Master Sergeant Messenger also sings for numerous New York Jets and Giants football games. She is often highlighted in Army football halftime shows, and she performs for many official functions at West Point and in New York City for distinguished guests, politicians, and international dignitaries. Master Sergeant Messenger has studied voice with Walter Blazer, Mya Vernole, and Phyllis Curtin.