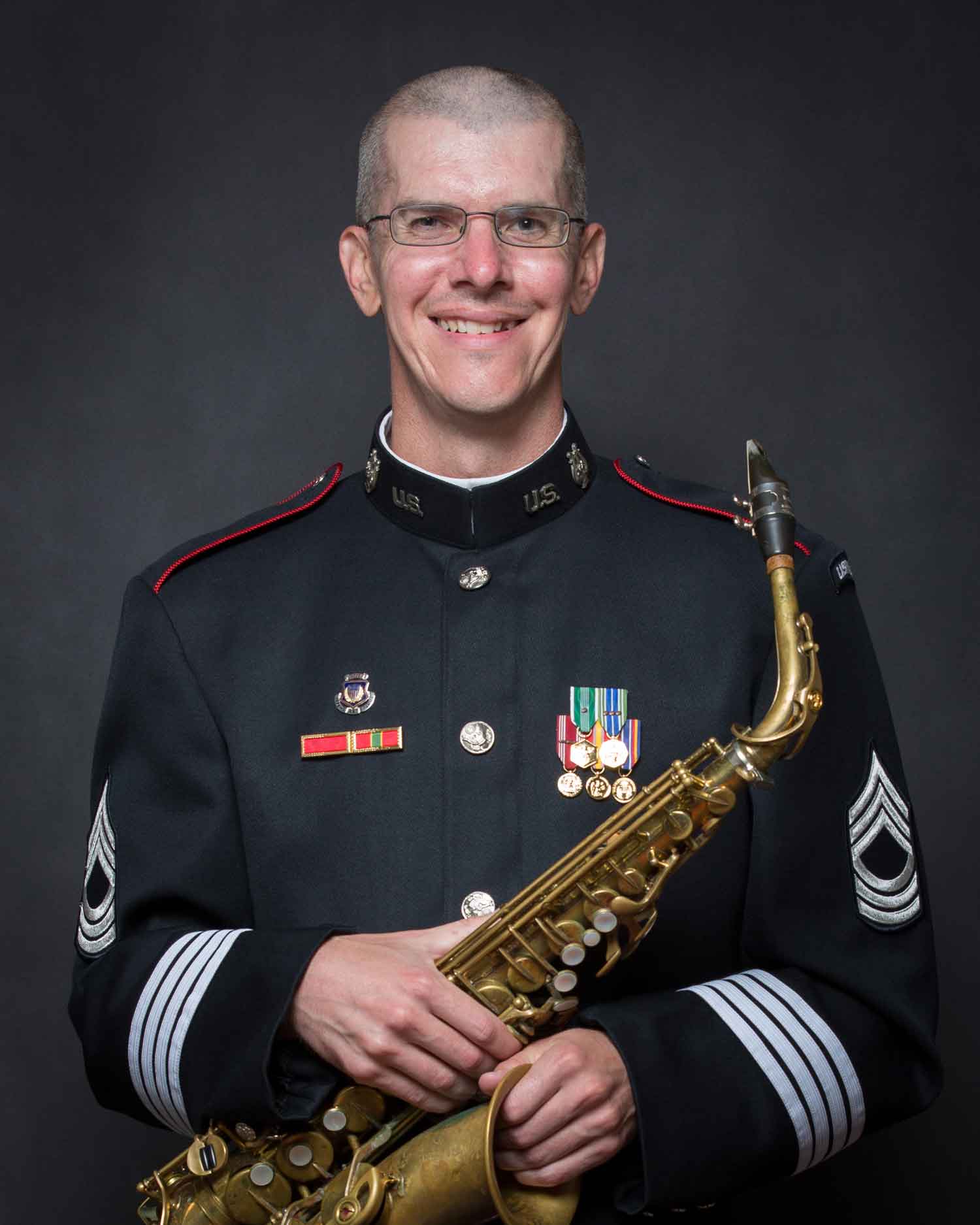 Master Sergeant Michael Reifenberg, a native of Cudahy, Wisconsin, joined the saxophone section of the Jazz Knights in September 2005. In 2003, he received a Bachelor of Music in saxophone performance from the University of Wisconsin at Whitewater. Two years later, he completed a Master of Music in jazz studies at Indiana University School of Music, where he was also an associate instructor under renowned jazz pedagogue David Baker. Throughout the years, Master Sergeant Reifenberg's most influential teachers have been Curt Hanrahan, Rob Wilkerson, Tom Walsh, Pat Harbison, and David Baker. Additionally, he has studied improvisation with Ed Peterson, Joel Frahm, Clay Jenkins, and others. Master Sergeant Reifenberg has also performed with several jazz legends, including James Moody, Slide Hampton, Bob Mintzer, David Sanchez, the late Frank Mantooth, Denis DiBlasio, Matt Harris, Steve Houghton, and Jeff Jarvis. He was also a member of the Milwaukee Symphony Orchestra Pops, the Doc Severinsen Big Band, the American Swing Orchestra, the Al Cobine Big Band, the Milwaukee Jazz Orchestra, the Buselli-Wallarab Jazz Orchestra, and a host of other bands in the Milwaukee and Indianapolis areas.

Since joining the band, Master Sergeant Reifenberg has served as Education Outreach NCOIC and has taken on a de facto role as an arranger for various unit ensembles. He has arranged or composed approximately 150 pieces for the unit and takes great pride and pleasure in his work. He recently made the transition to the West Point Band’s Concert Band, where he gets to call upon his past training as a classical saxophonist in addition to utilizing his skills as a commercial musician.

Master Sergeant Reifenberg lives at West Point with his wife Megan and his son Marcus. In his free time, he enjoys having fun with Marcus, exercising, and playing golf. 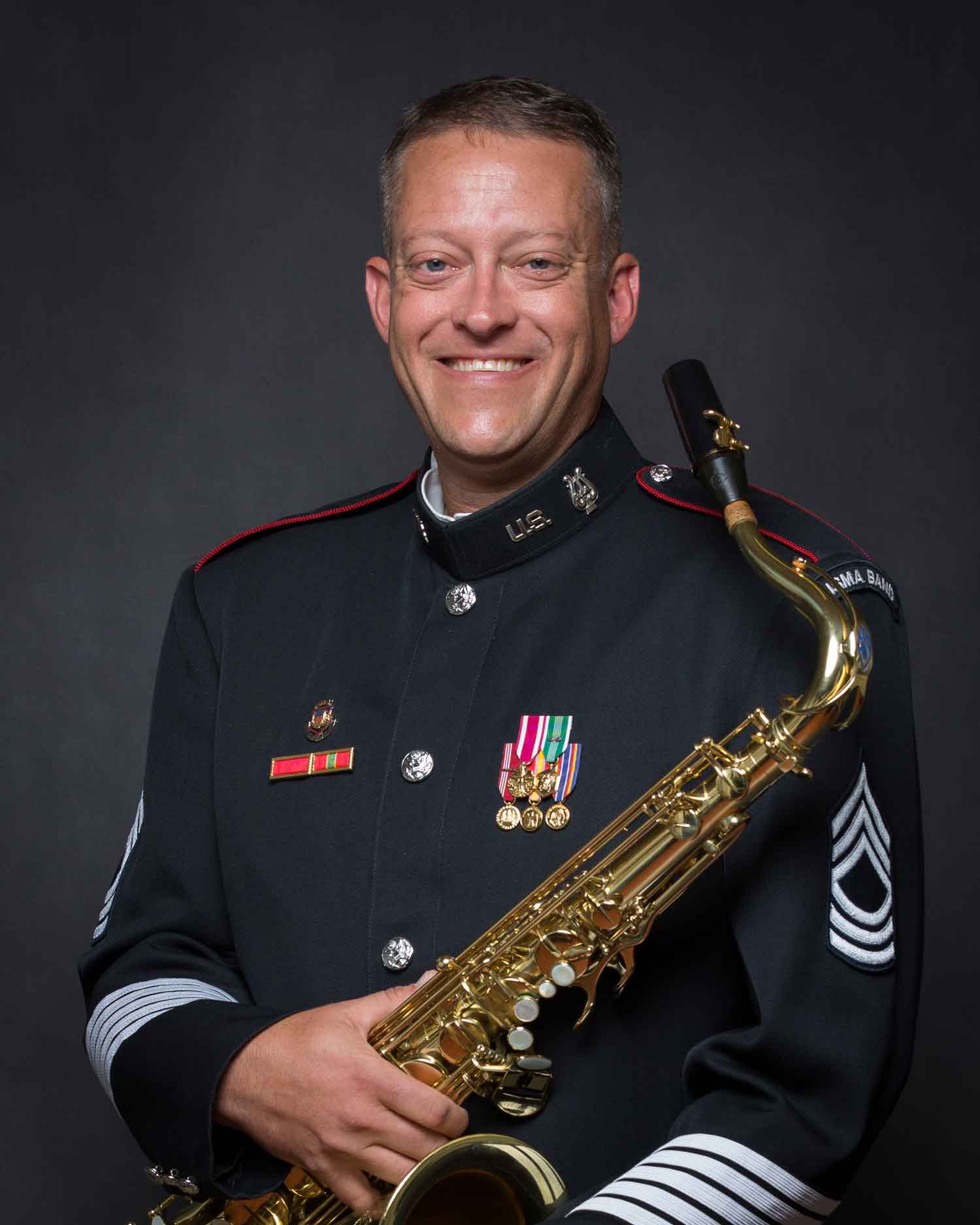 Master Sergeant Christopher Rettie is a native of Hopkinsville, Kentucky. He received a Doctor of Musical Arts from Louisiana State University in saxophone performance with a minor in wind conducting. Additionally, he holds a master's degree from LSU and a bachelor’s degree from Murray State University, both in saxophone performance. His primary teachers and mentors include Griffin Campbell, Frank Wickes, Scott Erickson, and Dennis Johnson.

Master Sergeant Rettie's other musical interests include conducting chamber ensembles from the West Point Band in repertoire from the harmoniemusik era to the present day. In addition, he is the instructor of saxophone, clarinet, and woodwind ensemble at Marist College in Poughkeepsie, New York. 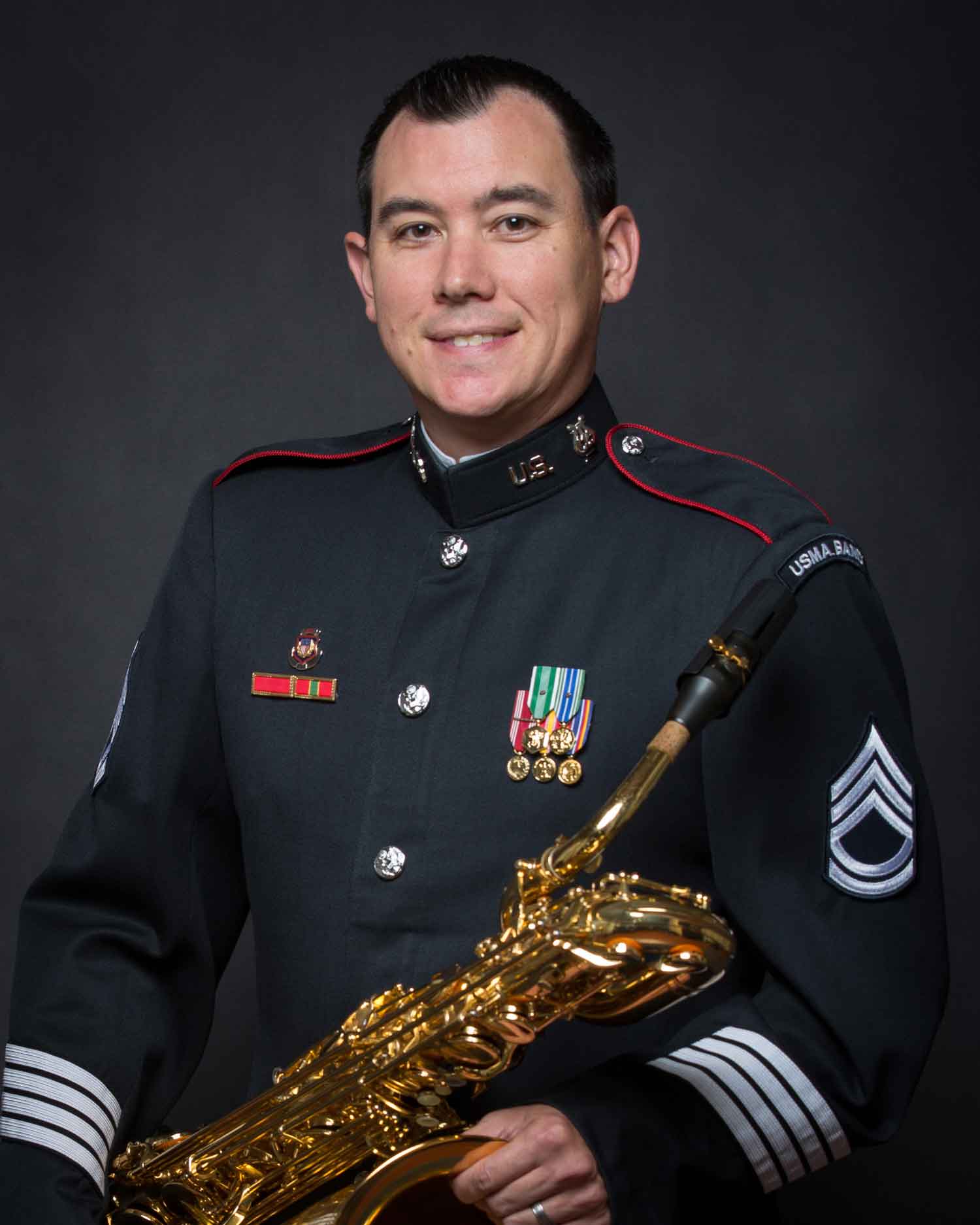 Sergeant First Class David Loy Song attended the University of Massachusetts Amherst and earned a bachelor's degree in African-American music and jazz in 1999. He has toured nationally and internationally with the Tommy Dorsey Orchestra (1997, 2001) and the Glenn Miller Orchestra (2002-2003), as well as on a number of contracts for Princess Cruises and Holland America Line (1999-2001). Sergeant First Class Loy Song's private instructors have included Yusef Lateef, Adam Kolker, Lynn Klock, Chris Merz, Ted Levine, and Jeff Holmes. Sergeant First Class Loy Song joined the West Point Band in August of 2003 as a tenor saxophonist in the Jazz Knights before joining the Concert Band in January of 2015. His notable performances with the Jazz Knights include The Jazz Showcase in Chicago, Illinois; The Jazz Kitchen in Indianapolis, Indiana; Blues Alley and the Kennedy Center in Washington, D.C.; The Jazz Standard in New York City; and the Midwest Clinic. Since being in the West Point Band, Sergeant First Class Loy Song has had the privilege of performing with Claudio Roditi, Conrad Herwig, Bob Mintzer, Walt Weiskopf, Benny Golson, Antonio Hart, Randy Brecker, Gary Smulyan, Scott Wendholt, Jon Faddis, Steve Turre, David Liebman, Darcy Argue, and Jim McKneely. 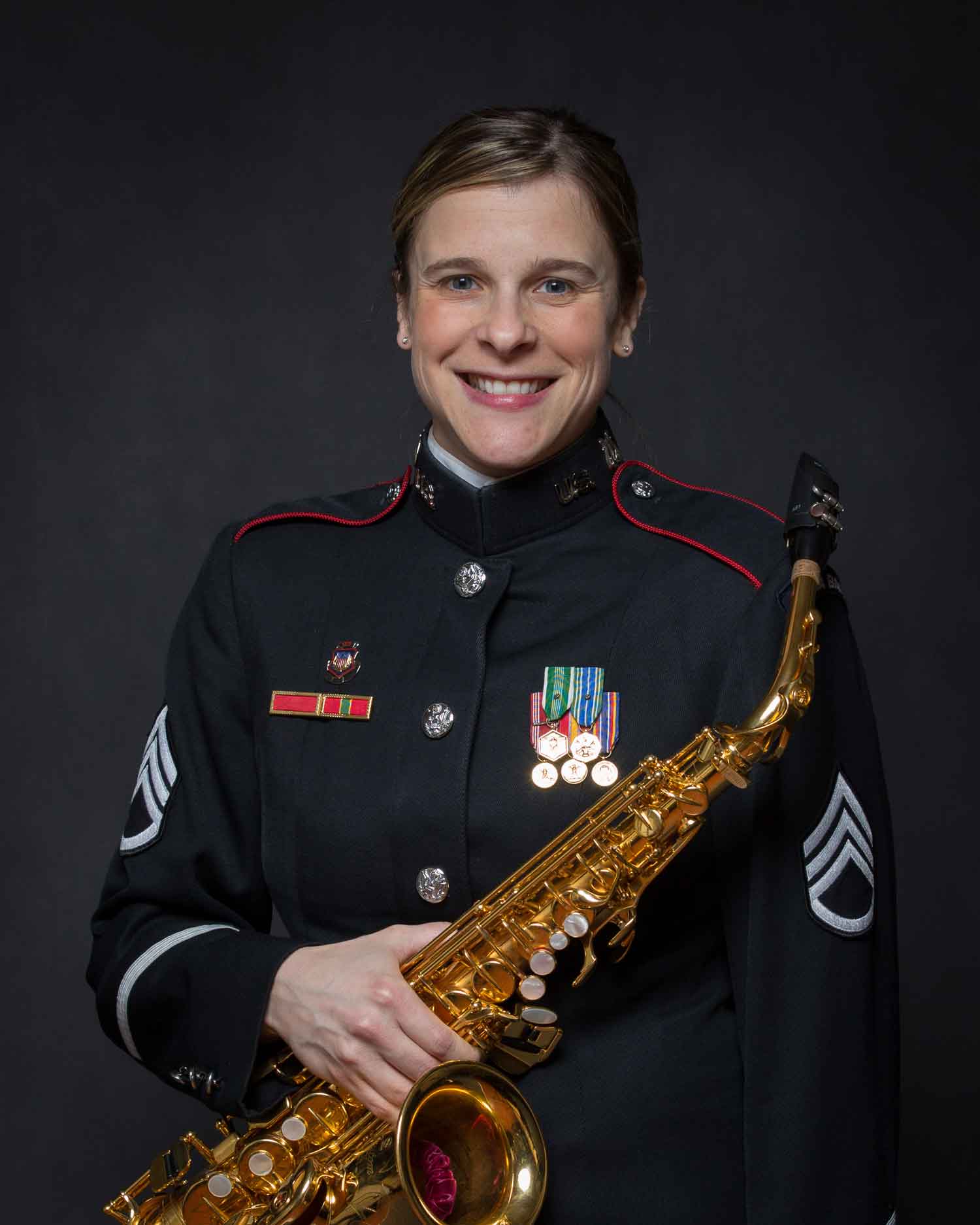 Staff Sergeant Stacy Wilson has been hailed as a “young saxophone virtuoso,” and has won top prizes in many national and international competitions. In 2009, she became the first American saxophonist to win one of the top prizes as a saxophone and piano duo in the Gaudeamus International Interpreters Competition in Amsterdam, widely considered one of the most prestigious competitions in the world for the interpretation of contemporary music. Staff Sergeant Wilson has also won first prizes in the William Byrd International Competition and the MTNA Young Artist Competition, among others.

As a soloist and chamber musician, she has performed throughout the United States, Europe, and Asia, with recent concert appearances in Japan’s Izumi Concert Hall, Amsterdam’s Muziekgebouw, and Mahidol University in Thailand. Staff Sergeant Wilson was recently featured as a guest concerto soloist with the United States Army Band in Europe, giving concerts in Oftersheim and Eppelheim, Germany. Since joining the West Point Band in 2008, she has performed as a concerto soloist and was the logistical coordinator and organizer for the North American Saxophone Alliance Conference hosted by the band in 2011.

A dedicated chamber musician, Staff Sergeant Wilson is the soprano saxophonist of the acclaimed Zzyzx Quartet. Featured in the Saxophone Journal as an up-and-coming young saxophone quartet, ZQ was described as “a superb ensemble with impeccable musical taste.” They won second prize in the inaugural North American Saxophone Alliance Quartet Competition in 2008 and were selected as one of seven semi-finalists in the Osaka International Competition in Japan, one of the only American chamber ensembles and the first American Saxophone Quartet ever invited to compete. Zzyzx was a featured concerto soloist at the NASA Biennial Gala Concert at the Tempe Center in Arizona and at a concert featuring some of the top young saxophonists from around the world at the World Saxophone Congress in St. Andrews, Scotland. In 2012, they commissioned an original work for saxophone quartet by world-renowned American composer John Mackey, which is featured on their newest CD, Intersections, released in June 2013.