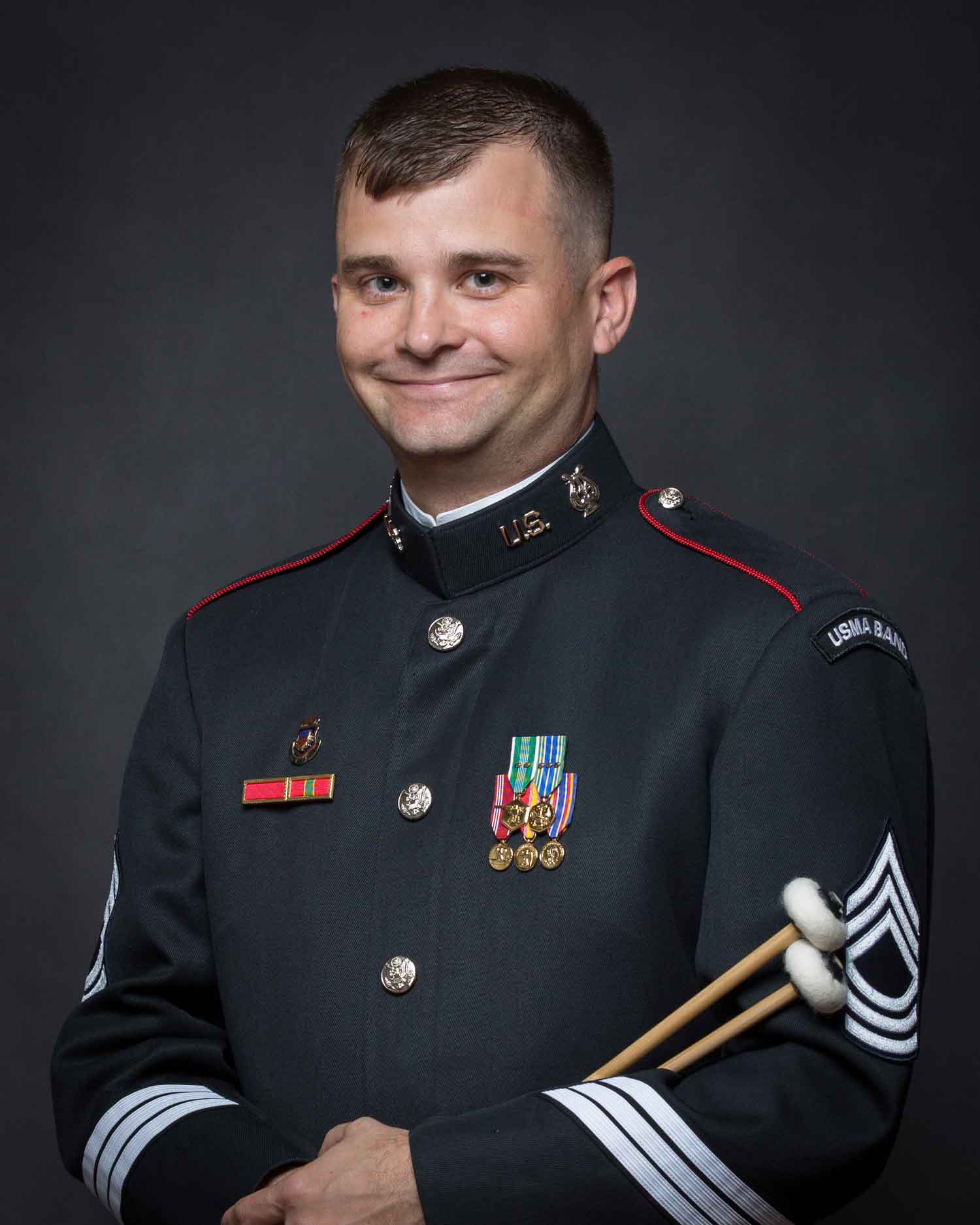 Master Sergeant Eric Garcia, a native of Hendersonville, Tennessee, joined the West Point Concert Band percussion section in 2006. He earned a Bachelor of Music from Northwestern University, where he studied with Michael Burritt and Jim Ross. Master Sergeant Garcia continued his studies at Cleveland State University, graduating with a Master of Music in percussion performance as a student of Tom Freer. After arriving at the band, Master Sergeant Garcia completed a Master of Business Administration from Marist College in Poughkeepsie, New York.

In addition to his marching and concert band duties, Master Sergeant Garcia works as the Logistics and Resource Management Branch Head. As an original member of the band’s jazz ensemble Quintette 7, he can be heard on the CD “Quintette 7 Plays the Music of Raymond Scott.” 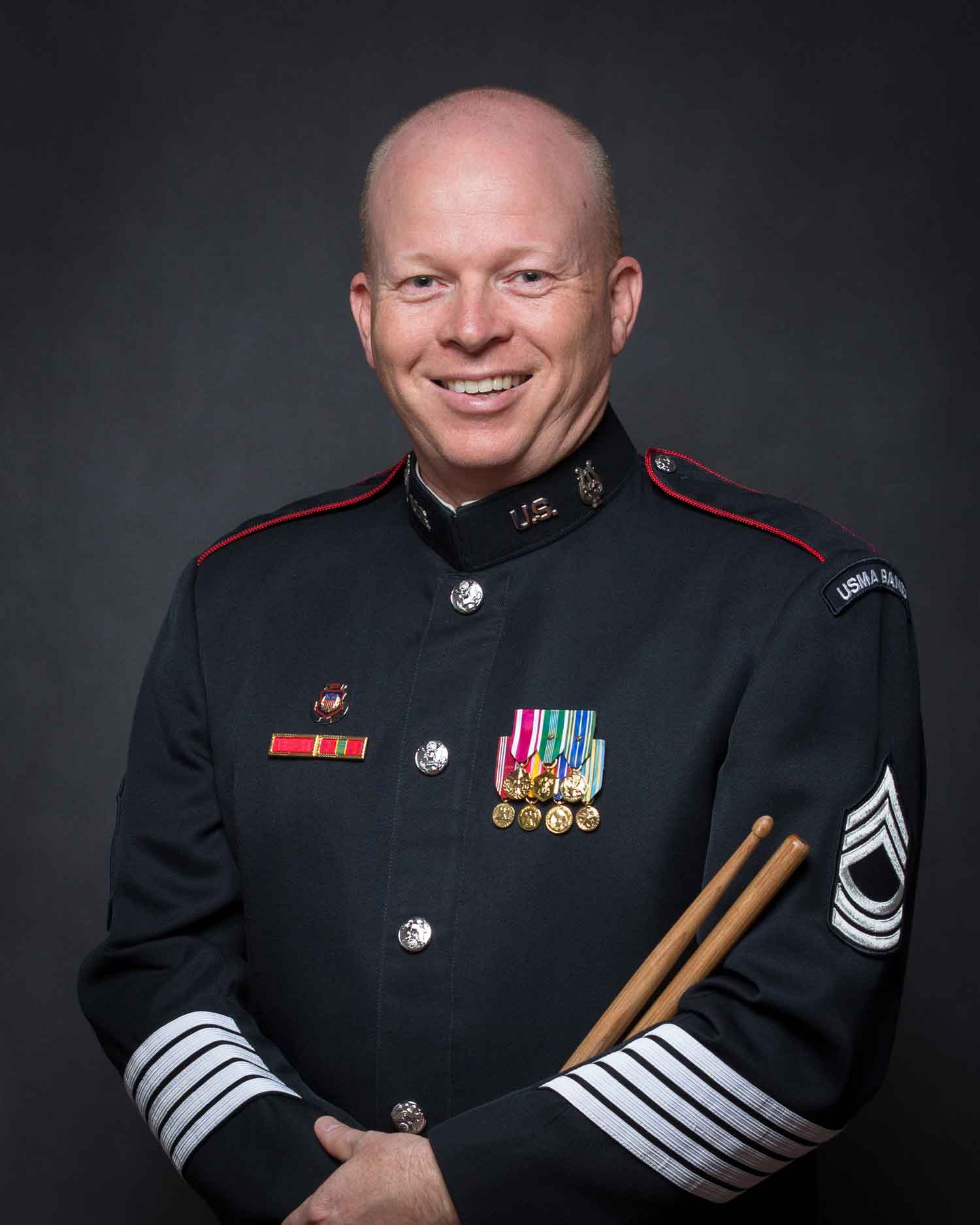 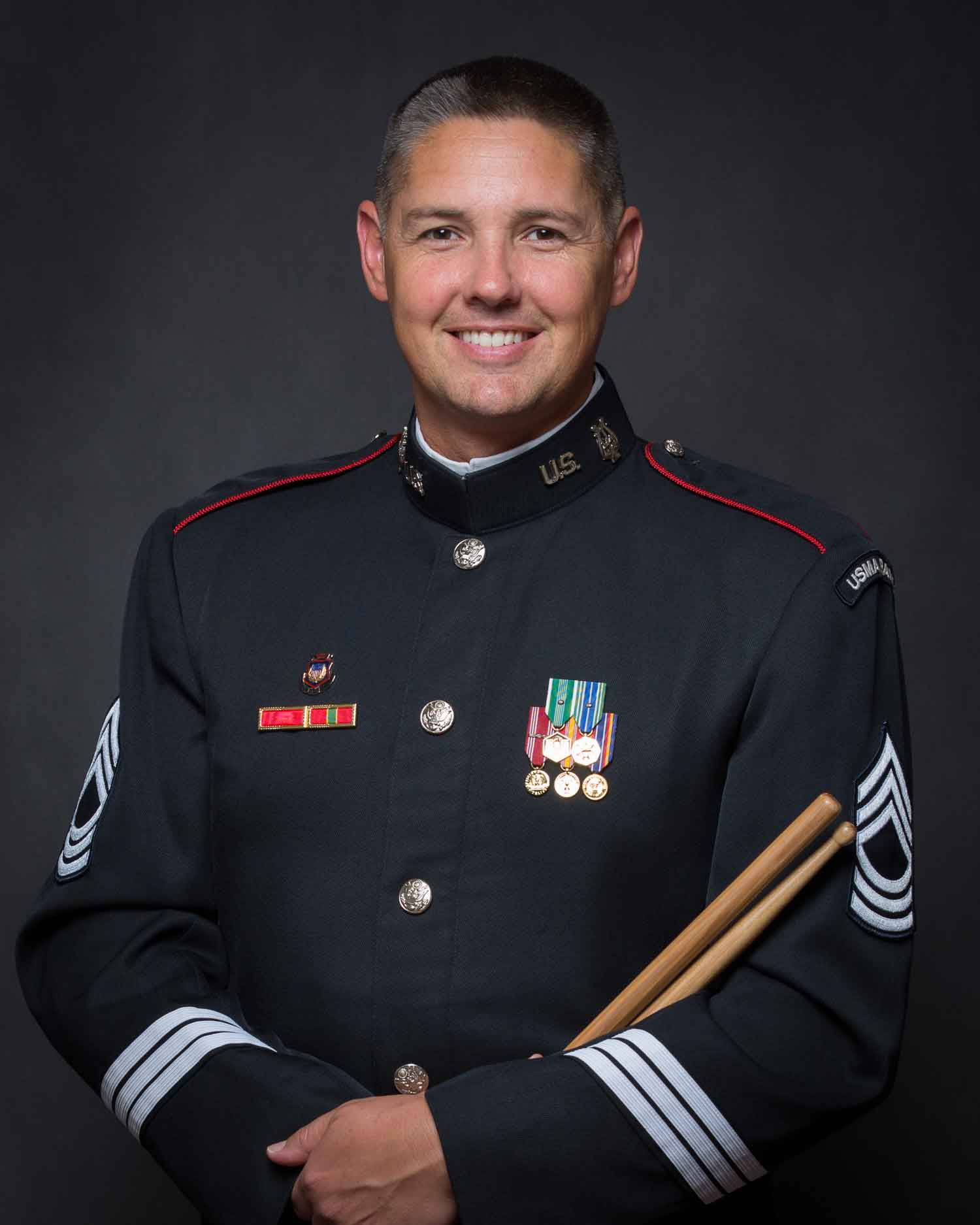 Master Sergeant Nathan Eby joined the West Point Band in September of 2007, after earning his Bachelor of Arts from California State University, Fresno and his Master of Music from University of California, Los Angeles, both in music performance. He was the Drum Section Leader of the Blue Devils Drum and Bugle Corps, winning two DCI World Championships and two High Percussion Awards. He was personally awarded Blue Devils Most Valuable Percussionist. In 2005, Master Sergeant Eby was the winner of the Atwater Kent Marimba Concerto Competition in Los Angeles. He has performed with Blast Inc. in their shows Shockwave and Cyberjam and was a member of the Frank Boehm creative force, performing at corporate events for companies including Cisco, Hyundai, Kohler, Honeywell, and Washington Mutual. During his time in Los Angeles, Master Sergeant Eby was a Teaching Artist with the Los Angeles Philharmonic and an instructor and music arranger for the UCLA Drumline. In addition to his current duties in the Concert Band, Master Sergeant Eby is Library NCOIC and Associate Marching Band Drum Major. He also performs with the West Point Steel Band and Percussion Ensemble. He has presented clinics for public schools, universities, PASIC, and The Midwest Clinic. He is also an active music arranger for GPG Music Publications and has written for schools across the country. Master Sergeant Eby currently performs with the Hudson Valley Philharmonic and is the Percussion Coordinator at Arlington High School in Lagrange, New York. Master Sergeant Eby’s teachers include Mitchell Peters, Dr. Matthew Darling, Dr. Tom Morgan, Scott Johnson, Tom Float, Paul Rennick, and Enildo Rausa. 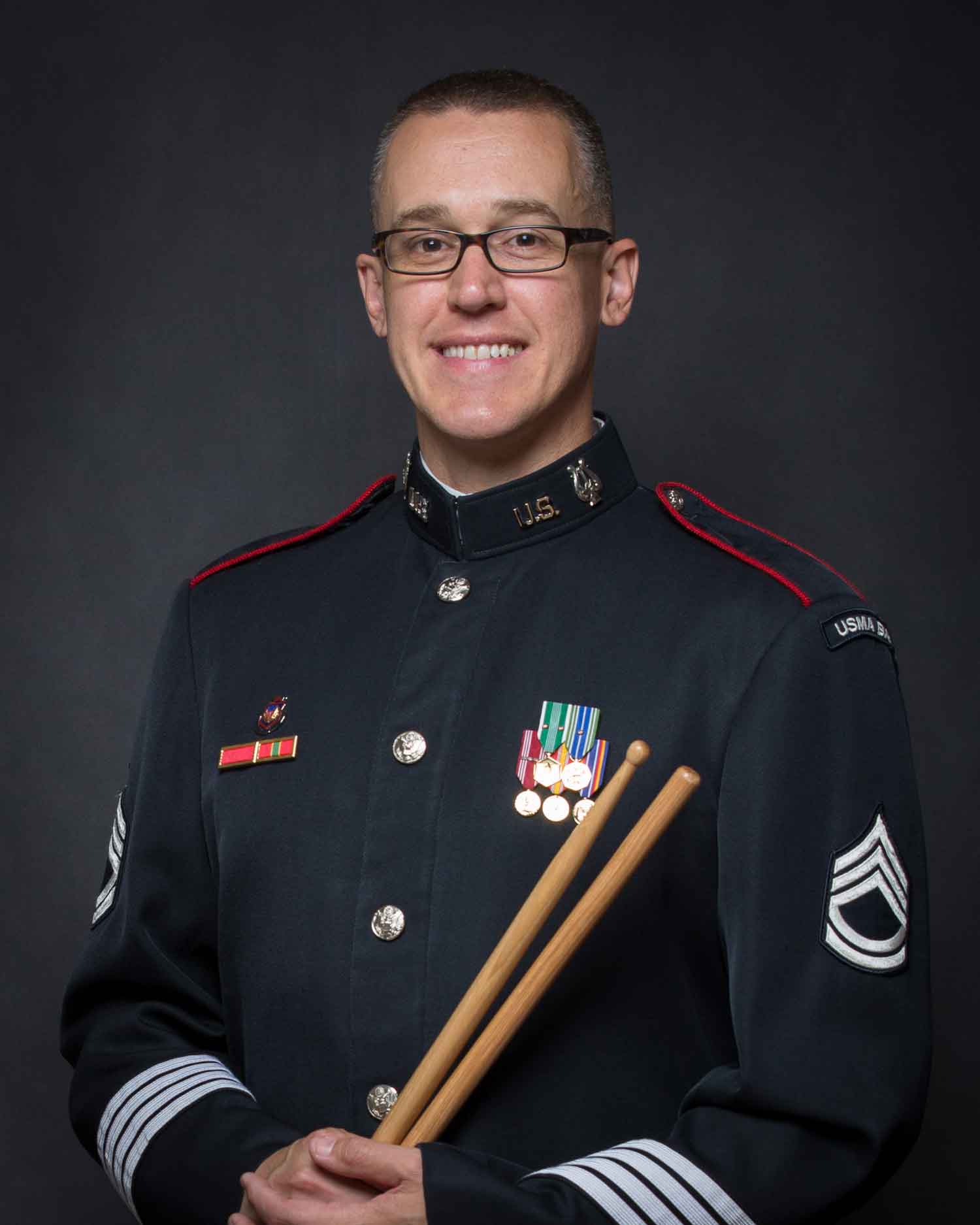 Sergeant First Class Craig Bitterman joined the West Point Concert Band in 2005. Prior to his tenure at West Point, he served as a musician for 2 years in the 50th Army Band at TRADOC headquarters at Fort Monroe, Virginia.

His percussion performance studies includes a Bachelor of Music from SUNY Buffalo under Jan Williams and Anthony Miranda, and a Master of Music from the Hartt School of Music under Benjamin Toth, Alexander Lepak, and Shane Shanahan.

Since joining the band in 2005, there have been many memorable live performances at various New York City venues. Some of these special moments include closing day at the old Yankee Stadium, Google live performance series, Macy’s Thanksgiving Parade and Fourth of July television broadcasts, and Independence Day celebration at Avery Fisher Hall with the New York Philharmonic.

Outside of performing music, he enjoys taking in the Hudson Valley landscape by hiking and biking local nature trails. Additionally, his recent interest in Yoga led him to Mid-Hudson School of Yoga where he practices Hatha and Raja Yoga. 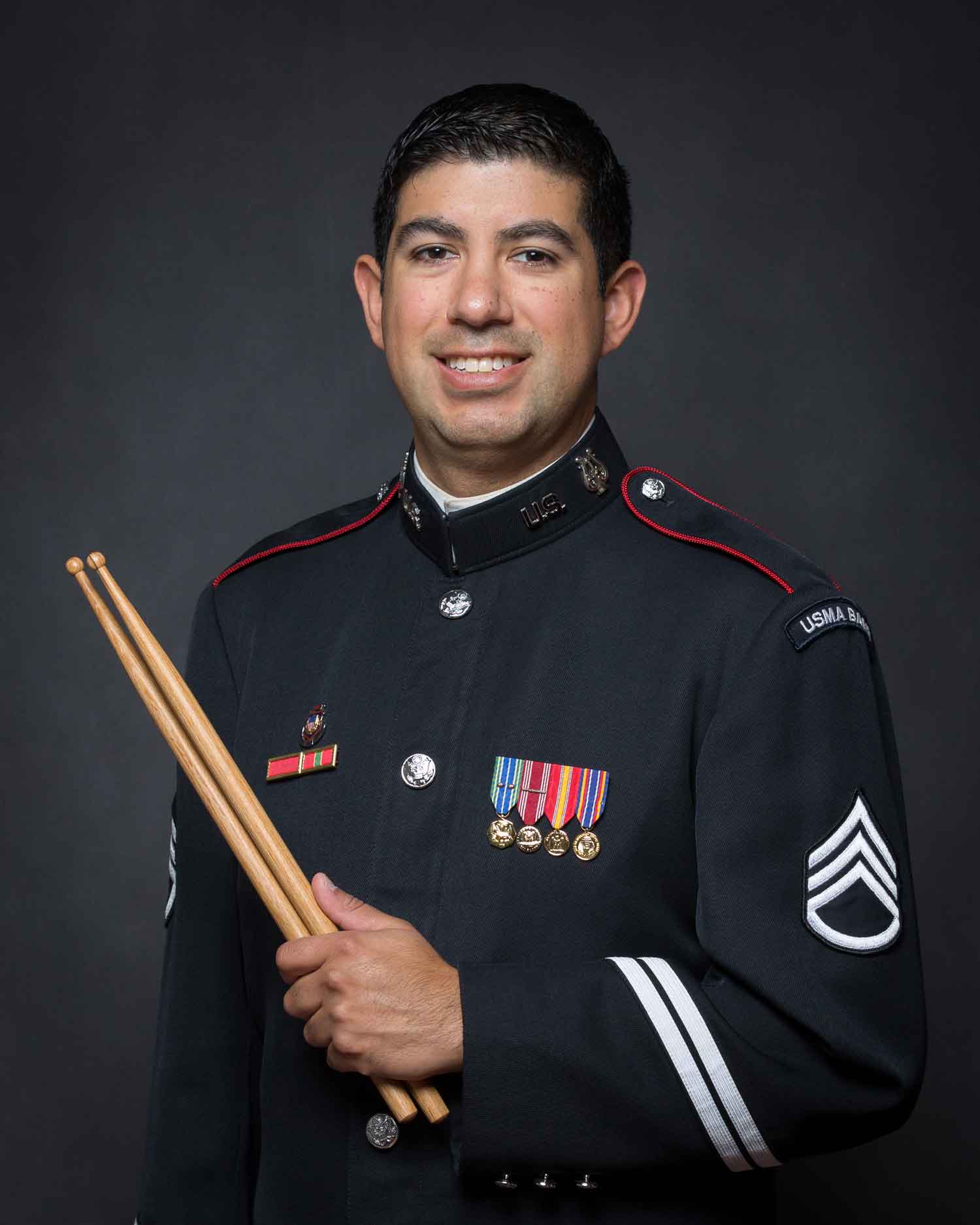 Staff Sergeant David Bergman is a native of Beaverton, Oregon. He received his Bachelor of Music in percussion performance from the University of North Texas and his Master of Music in percussion performance from Duquesne University. He was a graduate student at Cleveland State University before his appointment to the West Point Band. He was also a student at the Music Academy of the West for two summers. Staff Sergeant Bergman has studied percussion under Ed Stephan, Christopher Deane, Andrew Reamer, Chris Allen, Tommy Igoe, and Tom Freer. He has performed with the Oregon Symphony, Albany Symphony, Buffalo Philharmonic, West Virginia Symphony, Canton Symphony, Youngstown Symphony, and the Hudson Valley Philharmonic. He was a snare drummer in the Blue Knights Drum and Bugle Corps and the famed University of North Texas "A-Line" Indoor Drumline. Staff Sergeant Bergman has received numerous awards and scholarships, including winning the Pittsburgh Concert Society Competition. In his spare time he enjoys hiking, building snare drums, and finding the most delicious ramen soup in New York City.